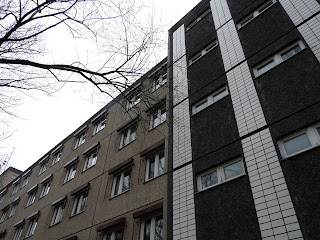 Every window sealed, every door locked, until we went around again. Back to the first door. I noticed just one bolt and the handle missing. I gave a gentle pull, a more persistent one, followed by a convincing tug. The doors swung open, we were in!
We didn’t know what it was, but we were about to find out. Quickly closing the doors behind us, we hurried away from the exposed entrance to the corridor to the left. Darkness awaited, but we made our way along, systematically opening doors left and right as we went, stumbling into a world of discarded office junk and neglected shit no longer wanted.
Jackets, chairs, desks, drawers, phones, files, tyres, a Bon Jovi poster(!), spanners, other tools, a huge discarded German flag, a wheelbarrow, even a bicycle! What the fuck was this place?!
The Landesamt für Bürger- und Ordnungsangelegenheiten Kraftfahrzeugzulassungsbehörde Berlin Lichtenberg – to give it its full title, which no doubt its workers used to take sadistic pleasure in doing every time they picked up the phone. 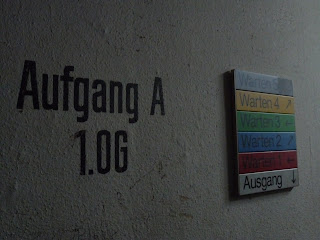 From a limited amount of research, enthusiasm dwindled by a lack of Stasi or Nazi involvement, I ascertained this was up to quite recently Lichtenberg’s regional government authority, where vehicles were registered, foreigners tracked (there were a lot of offices dedicated to Ausländers), and from where the local population was generally annoyed and controlled accordingly with great mountains of bullshit letters and pointless correspondence. They now operate in Friedrichstraße, from where they terrorise the Lichtenbergers with less likelihood of them calling in.
The electricity was still running – lights worked when switched on – but the water was switched off. Offices above the ground were either locked or bare, suggesting they may come back to gut the bottom rooms, or they simply got bored and gave up before they were finished. 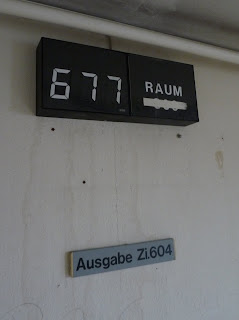 We were trying to get into the Stasi Prison when we found this place today. (Yes I know there are tours and you don’t have to sneak in. We wanted to see the bits they don’t want to show tourists.)
On our way, we also stumbled across a GDR (or shortly thereafter) industrial park where they used to wash and spray cars, make road signs for motorways, and where the buildings were made of absolute shite. They were smashed to smithereens, outside walls too, with the vandals betraying the prefabricated buildings’ utterly lamentable lack of brick.
An oul fart walking his dog stopped and came back for a closer look when he saw us poking around outside the fence. He was probably an old Stasi guard – habits die hard – with nothing better to do with his time than be pedantic. At least I hope he was. I’d hate to think he was normal.
Even his dog was tugging at his leash in embarrassment. “Come on for feck’s sake,” he was probably barking to himself. An Irish dog apparently. 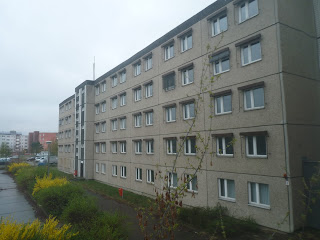 What
Former Lichtenberg local government offices, responsible for making sure all its citizens’ cars were properly registered, all the pesky foreigners kept in line, everybody appropriately bothered with enough inane paperwork to justify its own existence. It was so successful, all its officials were duly moved to a more fashionable address in the centre of Berlin. 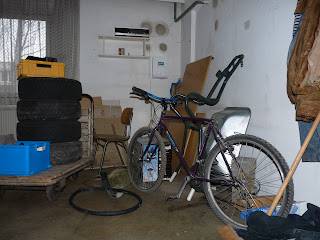 How to get there
Get the tram to Freienwalderstraße, walk down towards the Stasi prison and go around to the right of that. The industrial park will be in front of you, and the Landesamt is behind that. You’ll see the top of it poking above the trees.

Getting in
Hop the fence. Watch out for nosy codgers with nothing better to do with their time. Having said that, we just ignored your man in the end. 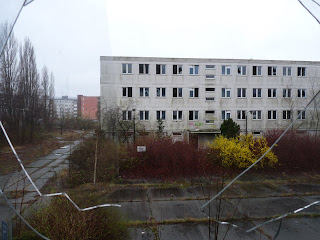 When to go
Whenever is fine. Although the electricity is running, I don’t think there’s active security – although I may be wrong!

Difficulty rating
2/10. Quite easy actually, once you get there, and once you find the door with the dodgy lock.

Who to bring
Whoever. Go on your own if you like being spooked out. 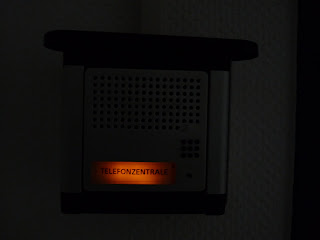 What to bring
Camera as always. A torch for the dark corners. Quiet soles – just in case!

Dangers
No major dangers as far as I can see, but as always, be careful, keep your eyes peeled and watch out for nosy neighbours.
Labels: abandoned buildings bureaucracy Bürgeramt DDR