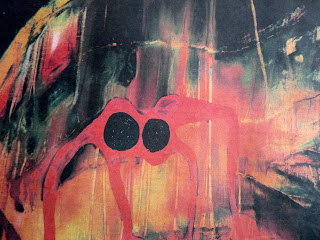 Radiohead’s first foray into the world of print media brought us to Kreuzberg today to get our hands on The Universal Sigh, the band’s first newspaper!
Not knowing what to expect but an expectation of the unexpected, I was surprised to get what I was told to expect – an actual newspaper, albeit one devoid of news (yet still more informative than many).
I didn’t expect it to be in German, however, although I realise it’s not altogether preposterous for a newspaper in Germany to be in German. 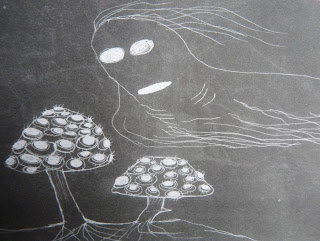 I guess they were being nice and catering to local demand, even if Berlin is home to more Auslanders than in all the Auslands put together, but still, Radiokopf in German?! Jaysus.
Released worldwide at noon (local times), the paper was free, making it affordable even for most Berliners, and it was snapped up at a relatively polite pace with no pushing, fighting, gunshots or screaming despite the lack of an orderly queue. 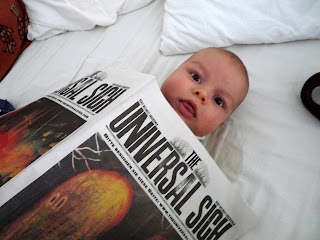 The nipper, a big (but yet the smallest) Radiohead fan, was very excited to get his little mitts on a copy, and of course his German is better than mine – he’s been living here his whole life after all – but I haven’t gathered to strength needed to read any of the articles yet. German articles are full of articles – der, die, dat, dit and so on – meaning you need to be very articleate to read them.
Instead I contented myself with pictures and artwork, looked up Pitchfork and found that a New Zealand magazine posted a PDF version in English! Grand. 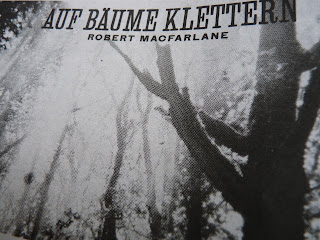 The nipper was delighted though, and is now eagerly awaiting details of a hoped-for tour. His infection for the music, combined with the danger he poses to my clothes, convinced me to invest in a back-up for my favourite Radiohead t-shirt. It should be arriving any day now, unless one of the Schweinhund neighbours stole it already.
All this newspaper publishing malarkey was apparently to promote The King of Limbs – another fantastic album – weeks after everyone already (legally) downloaded it, but it led to speculation the band may have other surprises in store, hence the certain uncertainty. In the end there were No Surprises (yet), in itself the most surprising thing of all. 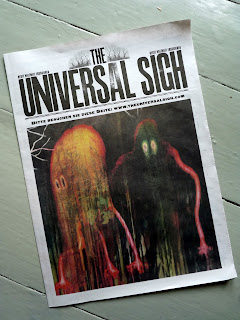 The artwork featured here is not by own, but the pictures of it are, so I'm not sure who owns the copyright to what. The nipper is mine of course, at least until he gets a job.
I have a couple of spare copies (in German) of The Universal Sigh, worth a fortune, but free for any genuine fans who promise not to try and flog them for capitalist gain. You'll have to pick them up yourself though.
Labels: Music Radiohead