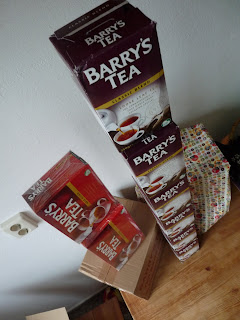 The tea arrived yesterday! The situation had been allowed deteriorate to critical levels and so I’d taken matters by the scruff of the neck and ordered 240 bags directly from the Barry’s Tea online store. Hang the expense! (Not as bad as I previously thought actually.) It’s a sad house indeed which doesn’t have any tea, and there wasn’t a moment to lose if I wanted to avoid that calamity.
I could barely contain my excitement as I contemplated the special delivery from Ireland. My tongue was hanging out of my head as I ripped open the very fancy packaging to feast me eyes on the anticipated wonders inside – six boxes of loose tea. Huh? Classic Blend, not the Gold Blend I’d been expecting. Jaaaysus. They’d mixed up the order!
A quick email to Barry’s and an hour later, a response apologizing for the mix-up: 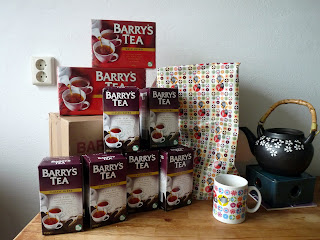 “We will send you a replacement order as soon as possible. No need to send back the Classic, enjoy!”
Of course I put the kettle on straight away. Tealicious!
This morning at 10am or some ungodly hour like that (yes, they make the poor fuckers work on Saturdays here), another package arrived, covered in familiar wrapping. My tea! 240 bags! They must have sent it immediately after sending the other shipment. So there were two pots of tea for breakfast this morning, and who knows, there may be yet another shipment en route. Teariffic! 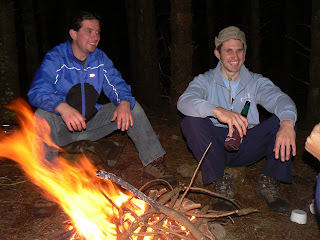 The stockpile’s healthy once again, and may (although I doubt it) even get me through to July when I’ll be able to stock up again. We’re going home!!! Nipper and entourage will be returning to coincide with Noddy’s return from Australia to celebrate his wedding with a piss-up which has Ireland’s breweries brewing overtime in anticipation of expected demand.
Jaysus, little did we know the last time we met, that the next time we’d meet, I’d have a nipper and he a wife! Sully’s the only one yet to make a move... 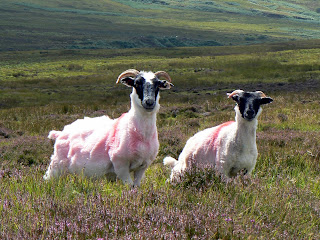 The nipper may be only seven weeks old, but already he has a long list of admirers waiting to make his acquaintance. Then of course, there are all the sheep and cows we have to introduce him to too.
I forked out more to fly with Aer Lingus. I would rather stick forks in my eyes than fly with Ryanair who are nothing but a shower of Scheißes. Only one way is booked for now – with such a piss-up in store, it would be unwise to plan anything at all for afterwards. Who knows if we’ll make it back at all! But we’re going home... Now that is teariffic.
Labels: Ireland Noddy Sully Tea