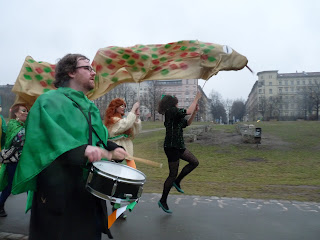 Beannachtaí na Féile Pádraig oraibh! A bit late I know, but yesterday we were at the very first St. Patrick’s Day parade in Berlin! A rag-taggle bunch of festive stragglers dressed in varying degrees of degreen following four girls brandishing a snake being banished around Görlitzer Park by the very man, St. Patrick himself. Brilliant. 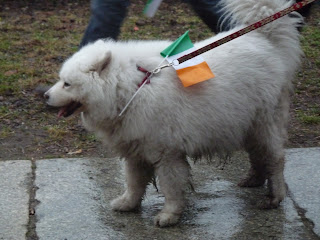 Derek Scally of The Irish Times reckoned some 250 desperadoes took part “if you squint” and at least two dogs (only slightly less desperate) joined in the fun too. There was a bit of consternation when the congregation ran into the local hounds belonging to the punks and drug dealers who like to call the run-down park home, but once the customary barking and arse-sniffing pleasantries were exchanged, we all proceeded as before. The dogs sniffed and barked too of course. 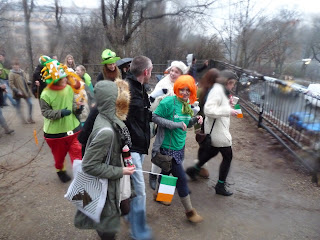 A fella dressed in a leprechaun outfit complete with orange hair and beard followed behind on his bike, towing a trailer blasting out diddley-eye music, while a lone drummer accompanied the snake up front as it wound its way though the muddy patch flanked by graffiti and sorry stumps of trees. 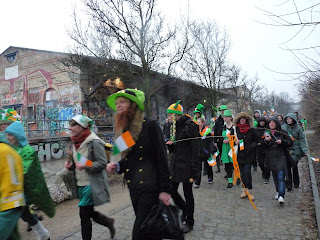 The weather obliged by being typically Irish, damp drizzle pissing down from the greyness accompanied by a bitter chill to ensure it could only be described as fuckin’ miserable.
The nipper slept, or at least pretended to sleep, through the whole thing. He’s only impressed when engaged in dangerous and highly illegal activities it seems, and so a bunch of revellers traipsing around a park in the rain held little interest for him – although I’m proud to say the parade was illegal too, making it the third unlawful activity the nipper’s been engaged in in the space of four days. 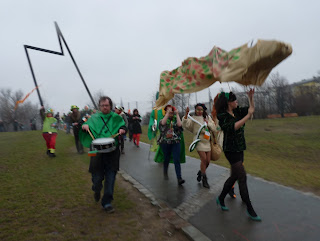 It ended where it began, in a Mexican restaurant on the edge of the park. Where else? Judging from the racket, tequila and diddley-eye were made for each other. Fiesta mór!
¡Viva San Patricio, the hombre who drove the snakes out of Ireland! 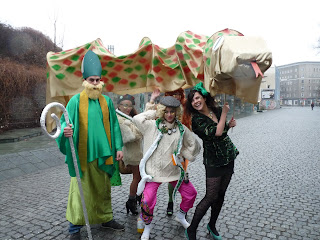 Yesterday also marked three years of my being an Irish Berliner! Mad huh? I'll get philosophical about it all in another post, another in my increasingly lengthy list of posts to write once I find the time.
Labels: Berlin celebrations festival Ireland Irish Times party snakes