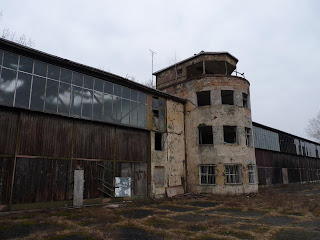 Today, to mark the two monthiversary of his landing, we brought the nipper on his greatest adventure yet – to the abandoned former military airfield at Rangsdorf! It’s the airport from where Colonel Claus Schenk Graf von Stauffenberg flew with the bombs to assassinate Hitler.
We were caught. So our excursion was about as successful as von Stauffenberg’s plot. 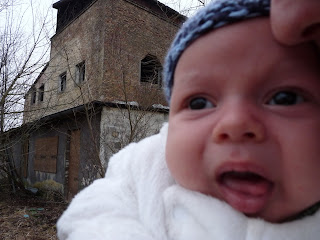 The nipper wasn’t as excited as I was about it all to be honest, even going so far as to sleep on the train as we made our way there, but he perked up a bit when I lifted the fence and Jenny wheeled him under in the pram. We were in!
We eventually discarded the pram due to the uneven terrain, and Jenny carried him on as he looked around with increasing discomfort as we passed empty hangers and approached the shell of the main terminal building. I assured him the Russkies were gone and any Nazis long gone before them, but the nipper was having none of it. 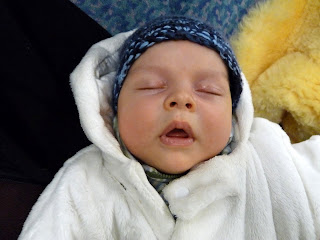 Perhaps it was unfortunate that the pangs of hunger struck at that particular time, but in any case I shall have to have a talk with him about basic etiquette while sneaking around places you’re not supposed to. Certainly, crying and wailing for grub is not very discreet or helpful to keeping a low profile while trespassing in an area surrounded by a link fence with “Betreten und Befahren verboten!” plastered all over the place. 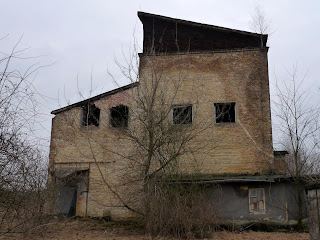 The security guard came along in his car when we had nowhere to hide, directly in front of the main terminal building. We played the stupid tourists’ card, “Do you speak English?” and he very nicely informed us we weren’t supposed to be there and that we should leave.
So the exploration was cut short, but the nipper got his grub as soon as we hopped back out under the fence, and slept all the way home in the train. Enough excitement for one day.
Labels: abandoned buildings airport Nazis nipper Rangsdorf Ruins Russia security war