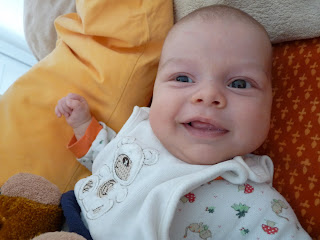 The chubby cheeked little feller’s gettin’ big. Big? Flippin’ HUGE more like. The nipper’s now got six bellies and four chins. The bellies flop to his sides when you lie him down. He has an insatiable appetite and it shows. He even dreams of food while sleeping, moving his jaws and licking his chops in anticipation of the snack he’ll call for when he wakes up.
He’s already doubled his weight since he was born. In two months! I don’t know if that’s normal. (Unlike some, I haven’t read a single baby book, preferring instead to get my baby trivia in the pub.) But we’re happy with his progress. The more he eats the better I say, although his mother – coincidentally his lunch – might privately disagree. 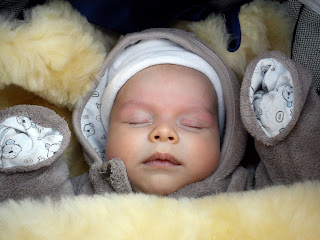 The aforementioned cheeks are the chubbiest I’ve ever seen on a human. I do not think a nipper has been produced with cheeks chubbier. They’re massive, in the literal and culchie sense of the word.
He’s been having a hard time the last few days though. He hasn’t had a dump for almost a week and is feeling the pressure. Like Angela Merkel, he’s full of Scheiße. So we’re waiting with bated breath for the inevitable eruption. The last days of Pompeii... 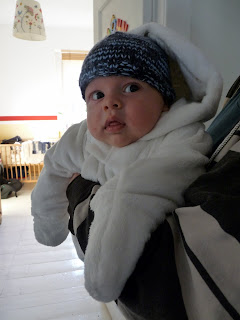 When he’s in distress, music seems to soothe his troubles. Luke Kelly has a captivating effect and Radiohead’s latest album seems to be a particular favourite. Jenny sings to him every night so I’m sure it’s only a matter of weeks before he has a band up and running.
He simply LOVES people talking to him. He lures them in for a chinwag with his chubby cheeks and responds with happy grunts, stretches and killer smiles. As mentioned before, his smiles are contagious. So he’s quite a sociable fellow, and people seem to like him despite his terrible manners, farting and puking away with impunity. Won’t be long before he’s sneaking off to the pub, if he isn’t already. (It would explain the beer bellies. And the manners.) 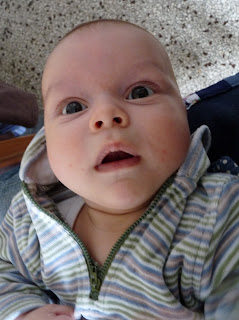 He’s also got a peculiar fascination for shelves, their corners in particular. He spends hours swinging his head back and forth as he looks from one shelf corner to the other, comparing angles, no doubt noting their shoddy workmanship.
After last week’s unsuccessful venture to Rangsdorf, he seems to have developed a taste for excitement. He was complaining today as we went for a walk in a boring park. So the verboten has its appeals, even at such a young age.
Two months ain’t long, but already he’s showing a joie de vivre, albeit a sleepy one. For his second monthivarsary celebrations last week, we brought him to a Mexican taqueria in Kreuzberg. He slept the whole time, wasn’t arsed at all with the festivities. I even had to drink his tequila! Next month it seems, we’ll have to do something really exciting. 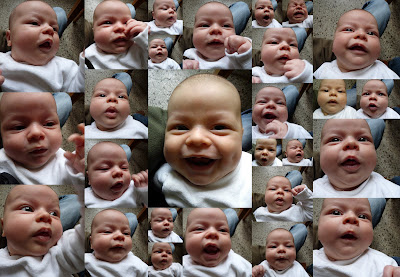