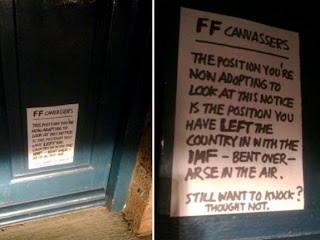 Watching the three leaders’ political debate ahead of tomorrow’s election, I was struck by the sheer gall of Micheál Martin’s calls for honesty and transparency from his opponents. The guy who blatantly lied about the IMF, who voluntarily takes over the crooks responsible for the ruin and damnation of Ireland brought about by systematic lies, betrayal and greed is now calling for openness. Either he is a complete fool or everyone else is. 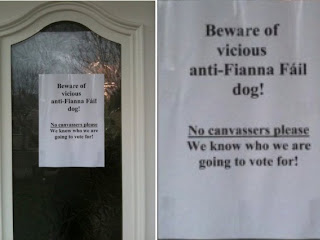 How Enda Kenny didn’t turn around and slap him. “Shut up Micheál you treacherous rat,” with a disdainful flick of the back of his hand.
I’d love to be able to vote tomorrow, but understand the reasons I can’t. Conversely I should be allowed vote here but can’t do that either, despite paying the same taxes etc. as any Chancellor-fearing German does. I guess they don’t want the smelly immigants voting in smelly immigant Politikers, an alternative to the NDP, but I digress – this is about Ireland. 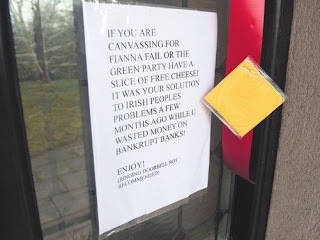 I was still living there during the last election. “If those fuckers [Fianna Fáil] are voted in again, that’s it, I’m leaving the country,” I remember saying at the time. Little did we know.
Ireland’s misfortune is self-inflicted. The people voted in these self-serving gangsters in the first place. Tomorrow is a chance to put that right. Even if the alternative fails to live up to its promise, at least something might change.

These pictures are not my own, but come to me courtesy of Jill after doing the rounds on the interweb.