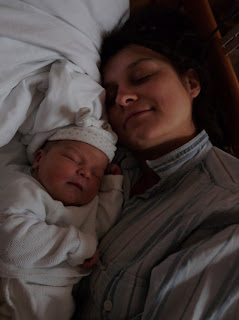 Thank you all so much for the congratulations and well wishes. Fionn was thrilled – so delighted that he puked all over the newspaper he was pretending to read. It was only Bild. Any of the Irish ones would have made him puke as well.
Double digits today. Ten days old! Who would have believed it? It seems a lifetime ago since he entered the world and we had some sleep. We’re all exhausted, shattered, almost too tired to type. Certainly the other two are, snoozing away behind me, while I’ve had a measure of relief going into work the last six days. Bundesliga, bobsled and luge have been dragging me from my fledgling little family’s first week. 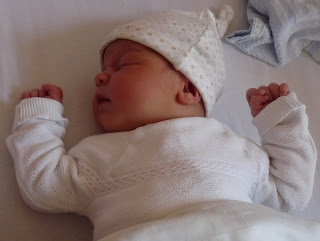 Damn is it hard to say goodbye. Not that the nipper notices, but leaving’s a struggle – I feel I’m abandoning them every time – and I rush home to be with them again as soon as I finish. I haven’t even been out for celebratory pints yet! I know, everything’s gone mad.
He’s yet to learn to sleep a night through – apparently that can take three to nine months! – so nights have been interrupted to say the least. He enjoys his mid-night snacks and has a voracious appetite. Poor Jenny’s become a walking dairy; between nipper naps there are nipper craps and nipper pees. His repertoire is quite basic. But he’s like a hostage-taker with no means of communication – we’ve to figure out the demands. 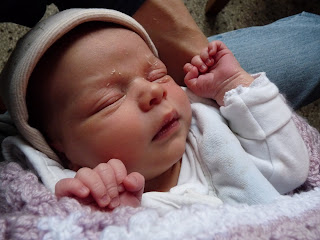 He doesn’t cry much but when he does – Jaysus! – he’d wake Beethoven. So I got him Beethoven. Today was the day the nipper discovered music. He seems to have a taste for it. We haven’t gone through all genres yet, but he definitely likes classical, jazz and traditional, and he doesn’t like rap. Maybe the older stuff reminds him of his youth.
The music was discovered to distract him from his own. “You might have a Pavarotti,” warned my mother, and he certainly has the lungs for it. He’s a night howl. The walls quake. They quake with trepidation before he even starts. I comfort myself with the thought he’s waking the neighbours too. 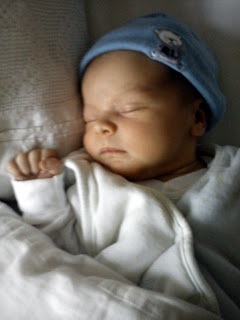 Apparently this is the time the growing pains begin. No wonder he's howling. He’s also peeling like a rattlesnake. I told him there was no rush – never mind nature, he should grow at his own pace, or not at all. “You’re big enough nipper. Just stay the way you are.”
He could only curl his tiny fingers halfway around my thumb in response. But the point was made.

I promise the next post won’t be about the nipper. This ain’t a baby blog and the young fella needs his privacy. Normal service will resume with tales of the Stasi, Bürgeramts, bureaucracy and doctors who tell you to ring three days later to make an appointment before showing up with your emergency. Seriously. There's no lack of material. I'm happy to have the nipper at my side.
Labels: Life Music nipper