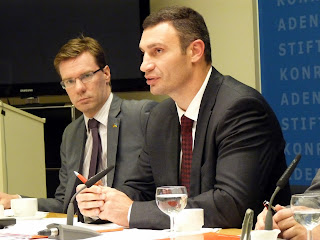 I met Vitali Klitschko on Tuesday. Seemed like a nice enough fella. But then I’m hardly going to say anything else about the WBC world heavyweight boxing champion.
Dr. Ironfist, as he’s also known, was in Berlin to promote his political party – years of dealing with blockheads in the ring has given him a taste for more – and he happily spoke in Russian and German on his grand plans for Ukraine to be brought into the bosom of Europe.
“When you compare politics with boxing, I can say politics is a fight without rules,” he said. Here was a man unafraid to speak the truth, humble and articulate as he outlined his plans and ideals for what he wished to achieve in his native country through politics. 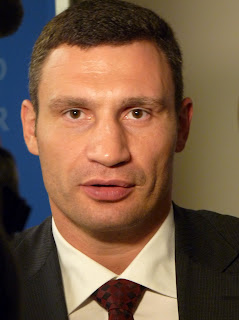 I thought of my own native country, and the utter shite it has been left in by politics and its vested interests. Just when you think it can’t get any worse it does – as if presumptions are some sort of dare. The Taoiseach (head honcho) cannot run his own party, but is still deemed fit enough to run the country. A fucking joke is all it is. Only a rich few are laughing.
The election’s coming up. What will change, if anything, is anyone’s guess. For me there’s only one solution to Ireland’s political travails – Vitali Klitschko for Taoiseach! What better way to keep the the Dáil in check than by sending in the world heavyweight boxing champ to knock their heads when they get out of line? I prescribe Dr. Ironfist. If things get really bad, he can always call on his brother Wladimir, also known as Dr. Steelhammer, to help him out.
Klitschko for Taoiseach!
Labels: boxing fight Ireland politics