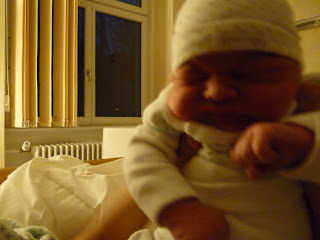 Three today! A lifetime over a weekend. As I type he’s sleeping here beside me, grunting and stretching with gusto with arms up beside his head. He’s cool – I think we’ll keep him!
Today was the homecoming – the day we finally brought the nipper home from the hospital! “Welcome home Fionn and Jenny!!! Ihr habt’s endlich geschafft!” He promptly woke up and farted. So much for the céad míle fáilte.
I guess the arrival that matters was Friday morning when he turned up in a birthday suit several sizes too big. With HUGE hands and a face he’s growing into. He’s had a thousand faces so far. He looks like my dad and Jenny’s cousin, neither of whom look anything like each other. Blinking, with puckered mouth, he cheekily sticks his tongue out as if tasting the air like a lizard. (Not that my dad looks like that.) He smacks his lips, sticks out his tongue and bites his knuckles when hungry. (My dad only does that when he’s very hungry.) Unfortunately, coordination is not yet his (the nipper’s) strong point. Gettin’ grub is a bit hit and miss. 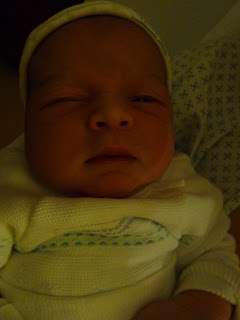 Only one eye could open at a time on his first day, but he can open both gleichzeitig now, albeit briefly. He looks up with a puzzled expression while sticking his tongue out and blinking. “Who the flip are you?” (He would never say fuck.)
Sometimes he sleeps with one eye open – a wise move in these here parts. The little feller is already showing wisdom ahead of his days.
While sleeping he moves his arms about like an octopus trying to catch passing fish. When awake his yawns are as wide as the Amazon. They nearly take over his head as he leans back. He doesn’t like yawning, but does it quite a lot, even when sleeping, which he does quite a lot of too.
He seems to enjoy sneezing, however. We enjoy them too – the performances are great! In fact, most of his noises are quite enjoyable. 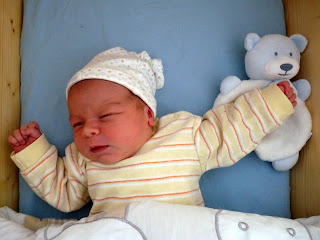 He squeaks and grunts away to himself, and sometimes sighs, no doubt as he contemplates the world he’s landed in.
Ominously, he’s been given a powerful set of lungs but he's spared us from their wrath mostly so far. Daumen drücken.
Jenny thinks he smells lovely, but I’ve been concentrating on his appearance. As I said, it changes all the time. We have to keep looking at him to make sure we recognise him. They didn’t put any name tags on him at the hospital. We’re happy to have the excuse.
Labels: Life nipper