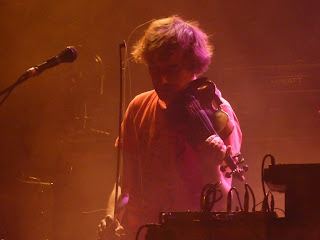 Yann the Man was back in town on Tuesday, although my aunt and uncle weren’t there to greet him. Plenty others were though, and they all stood directly in my line of sight. One fucker with big ears in particular. The volume was loud enough; he didn’t need them. But he moved his head this way and that, as if his giant receptors were somehow linked to my viewing attempts.
The Astra Kulturhaus was jammed, and Yann jammed along too, like his life depended on it. He had long ago abandoned Amélie and all her wonderful music, but recently he has taken to playing some crazy stuff altogether. Les Retrouvailles will never be found again.

This gig was on the back of his latest album, Dust Lane, but it doesn’t settle as well as the others. Forced sounds complete with synthesisers and aimless voiceovers just distract from Yann Tiersen’s real genius – the violin. Man, can that guy fiddle! After five songs with all the baggage he finally goes wild and the crowd does too. More, more, more! He gives us more. The string breaks. He stops. Awww. He plays on. Waaaaaayyy!!! Brilliant. 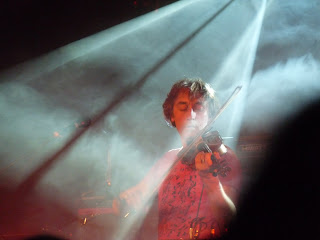 Meanwhile great clouds of smoke drifted up towards the stage. There’s supposed to be a smoking ban in Berlin but nobody in the city seems to give a shit. Once one Schweinhund started the rest of the selfish idiots followed suit until they were all chugging away to their lungs’ content (or not, as the case may be).
I find it bemusing smokers deem it their right to pollute everybody else’s air as well as their own, giving not one iota of a fuck for those around them. Of course I know some notable exceptions, but none of these were at Yann Tiersen.
Yup, Yann was smokin’ Tuesday – in more ways than one.