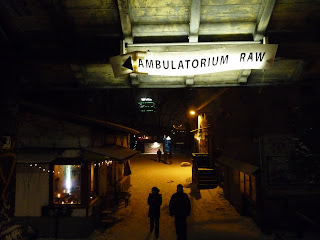 Snowing Katzen und Hunde earlier, it’s stopped now. It’s actually got a bit warmer too – it’s only minus 10 Celsius now. It was 14 below zero when I cycled home from work.
Gloves are rendered useless at these numbers, but my fingers are getting used to agony. I grasp the handles as hard as I can to force the blood through but the cold bites until it refuses. The cold presses down like a heavy fridge, slowly but constantly squashing until I can feel the fingers no more.
The only possible refuge would be up a fully grown seal, but of course seals are watertight and an adult seal on each hand would just replace one problem with another: steering.
Steering is hard enough through the snow and ice as it is. I’ve been cycling to and from work everyday and have so far escaped serious mishap. If you can still call it cycling. It’s more like ciceling. Or diceling. Everyday I’ve to shake off the night’s snowfall, battle with the frozen lock to set it free, and then balance like a drunken ballerina just to keep from falling. 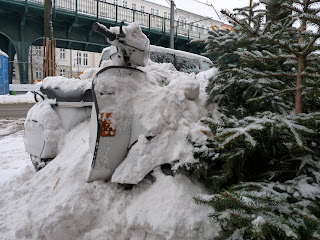 It’s been fun. Motorists are arseholes as always but some do show more courtesy, but the main problem for now is the tram tracks. They’re treacherous as vipers. Not as poisonous of course, but slippy. They’re slippier than well-oiled eels. Not drunk eels but the sort who like to get a tan. Greek and Italian eels and the like. Suffice to say tram tracks are deadly. One look at them is enough to send you scooting off onto the ice.
My brakes have been frozen so they don’t work anymore, but this may actually be a good thing in the world of a cicelist. Sudden stopping is just not an option as some careless pedestrians have been startled to find. Pedestrations follow, but they’re careless no longer.
Everything is inclement, even inclines. In fact, I’ve never before been presented with so many incles, but I have no inclination to give up now. Ciceling is still quicker than public transport, and I find the constant struggle of ploughing through banks of snow and ice actually is the only thing which can keep me warm, apart from the fingers of course.
The conditions have taken their toll, however. Tomorrow I’ve to get another new chain. I’ve become a chain reactionary. And I’m getting my boots repaired too. There’s not a moment to lose. 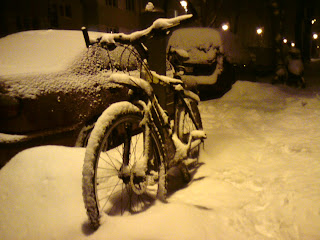 It might sound like I’m coping quite well with winter so far but this is only the beginning. It got down to minus 24 last year. These Germans are mad. No one would willingly live in a place so hellishly cold but they do it just to prove that they can. That’s the way they are.
They’re taking the piss, or at least the weather is. I can’t last five minutes outside without needing to pee. The cold must shrink my bladder or something. Five minutes after peeing, I need to pee again.
It’s just one wonder in Winter Wunderland. Kids don’t walk in this land but are dragged around on sleighs by mothers conveniently turned into reindeer. Berlin is unbelievably pretty for once, but it’s a femme fatale. I just wunder how the hell I’m going to survive.
Labels: Bicycle cold snow weather winter