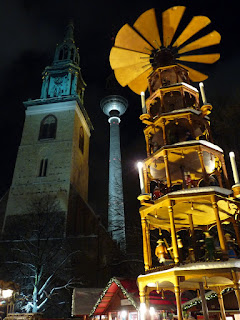 The summit of the expectant grandparents was – in the words of my dad – “a great success”. Introductions were warm and friendly, in direct contrast to the weather outside, and the occasion went off without a major hitch.
In fact, it was not nearly as awkward as I imagined it would be, with both parties appearing to get on very well despite some inopportune references to Hitler from one side and some indiscreet scientific analysis from the other.
No doubt the show-down was made easier by a spread usually only reserved for Irish politicians and bankers. Salads, fancy cheeses, a delicious tomato soup, and then a sumptuous turkey pie prepared by the German party, followed by apple crumble and enough chocolates and sweets to put Willy Wonka out of business, all washed down with wine and herbal liquor much to the appreciation of the Irish party. Promises to visit again were made before the parties could be separated.

I’d been worried about what my parents would make of Berlin, especially when the only sensible thing to do right now is hibernate, but they seemed pleasantly surprised, particularly with the food and wine (albeit Spanish) available from the local supermarkets. Highest praise was reserved for the bread – perhaps unsurprisingly: after all, it was Kürbiskernbrot which brought me to this city – and for the Glühwein, a necessity for life at this time of year. Then there were the museums and fare dodging on public transport. Fair dodging considering the prices.
‘Twas great to see them again for the first time in almost a year, to be able to show them around and reveal perhaps some of the reasons I’m living in Berlin and not Paris or Madrid. Neither has Kürbiskernbrot for a start.
No doubt the next reunion won't be so faraway. Of course this was my last as the centre of attention. 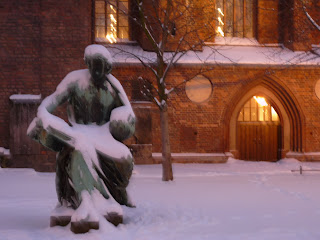 Life now resumes to as normal as it will never be again. I await the weekend’s Bundesliga action with bated breath, appetite whetted by a stunning preview in Sports Illustrated, Yahoo, the Taiwan News, and Canada’s Metro, among I don’t know how many others. A lot. There’s a silly thrill in just seeing that first byline knowing people all over the world will be mispronouncing my name.
Last weekend, my words appeared in The Canadian Press and 37 of them made it into The New York Times!
The AP Christmas party’s tomorrow. Now to get drunk and mess it all up.
Labels: AP Berlin Fußball Journalism work