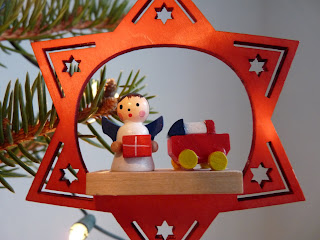 The tree is up! Finally. It looks great! It’s a bit wonky, so we called it Winky, and it smells of cat’s piss, so I guess we could have called it Stinky.
We didn’t think to smell the trees when we were inspecting them to pick the best one, and smells are not as pronounced in the sub zero outside world, so we didn’t notice that some tom cat had urinated all over our one. I guess the piss must have frozen on impact, and the true scent could only be released in the room temperature thaw.
The smell is unbelievable. I’ve been burning incense like an incensed pyromaniac to try and mask it, but its pungent whiff is kicking up quite a stink. 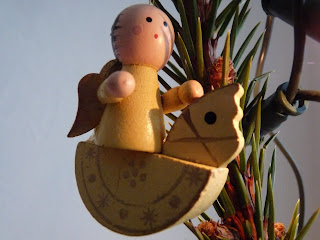 But we have a tree, which is the main thing. It was beginning to look like we wouldn’t get one at all. I didn’t want a murdered tree (unless I was going to murder it myself) so we were on the lookout for a potted one. The prices were crazy and when we eventually resorted to get one of the cheaper inferior ones, they were already all gone. Your wan in Blumen 2000 said they wouldn’t be getting anymore in because the ground is frozen and they can’t be dug up.
A generous donation from my parents for a tree meant we had to get one, so we were delighted to find a shop on Schönhauser Allee with potted trees for a reasonablish price. (Anything more than free is too much really.) 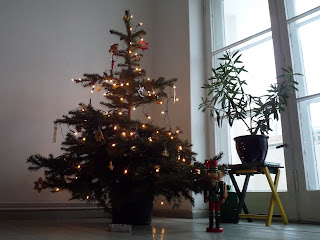 ‘Twas great fun carrying the thing home, first on the tram, trying to fit it in the door, and then lugging it back from the tramstop. Then we had to let it acclimatise, leaving it one night on the balcony and another out in the hall outside before we could bring it in. The sudden change from well below zero to a sane temperature would have killed it.
So now it’s sitting in our living room, covered in Weihnachtsschmuck and looking damn fine. I got the last of the decorations today. There are even a couple of presents under it too!
A pity Winky is stinky, but we love him all the same. Sure if it ain’t one thing it’s another.
Labels: Christmas Christmas tree