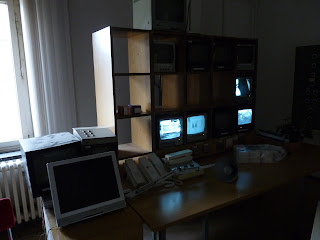 Down we went. An eternity later, the lift beeped again, doors parted – no one there. I* couldn’t believe it. We hurried to our door (not before trying all the others), scampered quickly out the window, ran along the roof, jumped down onto an electricity generator and off onto the pavement.
Walking hastily away, we headed back towards our bikes. We’d survived! The niggly feeling persisted though. It felt like we were still being watched. In fact, the feeling persists – they are watching me. And now they’re watching you too. 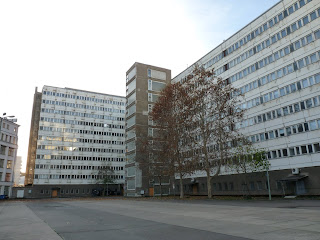 What
‘Haus der Statistik’, former statistics-gathering HQ of the German Democratic Republic (GDR, or DDR, depending on how good your German is), with the top three floors given over exclusively to the Ministerium fur Staatssicherheit, better known to you and me at the Stasi. I’ve written about these guys before.
Following German reunification, the building became ‘Die Bundesbeauftragte für die Unterlagen des Staatssicherheitsdienstes der ehemaligen DDR’, housing the Stasi files where natives could check the dirt dug and dished on them in East German times.
For legitimate visits to former Stasi buildings. I wholeheartedly recommend both the Stasi Museum and Stasi Prison. 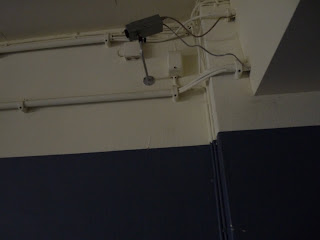 A tour of the latter is unforgettable.

How to get there
Walk from Alexanderplatz. It couldn’t be more central. Here’s a map. 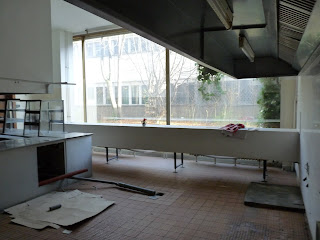 This is the tricky bit. It’s genuinely difficult – first scale the high wall at the side on Otto-Braun-Straße north of the giant coffee cup, try to squeeze under the ledge without falling back off the wall, slide onto the roof, keep low as you run along the roof, and if the broken window is still there, use a ladder or ladderish device to get in.

When to go
Daylight is best for the views from the top floor. 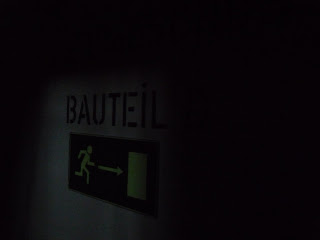 9/10. The only reason I’m not giving this a ten is because I was able to get in. It’s difficult, and dangerous. If you find a better way to the way outlined above, use it!

Who to bring
Someone to hold your leg. Preferably someone who isn’t as mad as a insomniac squirrel at hibernation time.

What to bring
Camera. Quiet soles. I guess you should make sure the camera is quiet too. 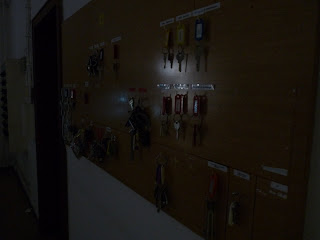 Dangers
Security. As far as we could tell this place is manned. The electricity is running, cameras too. Watch out for anyone and everyone who isn’t you. Fiend ist, wer anders ist. 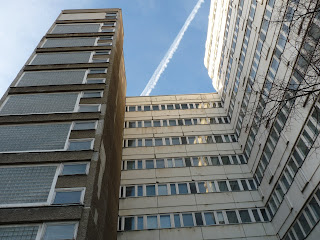 Apparently these buildings’ days are numbered too. They just can’t leave anything alone. Plans have them making way for hotels, shops, apartments etc. Bah. It’s a race to the bottom to make Berlin as bland and boring as any another city.
Once they realise what they’ve done they’ll rebuild the Wall for money. In fact...

Best to enjoy it now before they feck it up completely.

* Again, I is not me, nor am I included in we who have nothing to do with us, whoever they are. He/she (the author) refuses to accept responsibility for any grammatical errors in this disclaimer, and neither do I (as in me).
Labels: abandoned buildings DDR Germany Getting in history police shady shit Stasi verboten