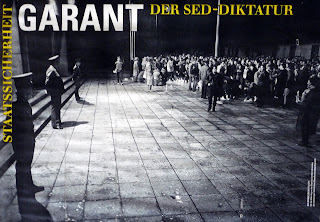 We were the enemy now. We* passed door after door after door, opening office after office after office, all the same, all empty. Horizontal stacks of uniformity.
The stacks went up too: we were in a beehive of offices 11 stories high. Wooden panelled walls lined corridors with big empty carpeted rooms at either end. Prying, prodding and poking, we made our way around the first floor stumbling across holding cells monitored by cameras, Stasi art and more propaganda – “Staatsicherheit, Garant der SED-Diktatur” – until we came back around to where the whistling had come from. 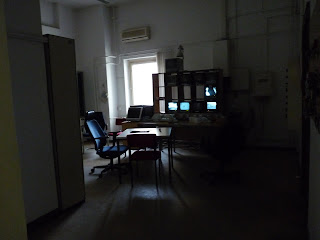 “That’s where I think the canteen is – down there,” said Chunko. “We’ve got to get down there!”
Tentative toesteps brought us closer and closer, and before I knew it we were down there. I examined a sole bottle of water left on a counter to see the best before date: it was still in date.
Chunko wandered in a bit when I stuck my head in a doorway. Shit. My heart stopped dead. Waves of alarm surged through my veins. I couldn’t move. Stunned. In front flickered a bank of monitors showing the very corridors we had just wandered, the gates outside, the windows, the entrances the exits... A desk stood before me, chair pulled out, and sets of keys labelled and arranged on hooks on a huge board on the wall. LEDs blinked as the monitors projected wavy images at the panic button in my brain. 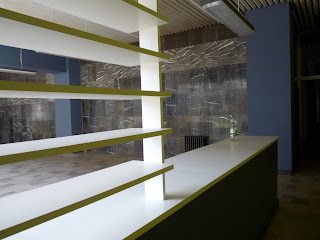 That was it. I signalled to Chunko to get the fuck out of there. Whoever was manning the surveillance was obviously just around the corner. It was them who whistled earlier. Let’s go! Communication broke down with my frantic signals, however, and so he came back to investigate.
So so carefully, we made our way in, into the lion’s den, barely breathing lest we make a sound. In slow motion we made it through to another room, bare and white, a huge desk and single chair, out to a corridor on the other side. 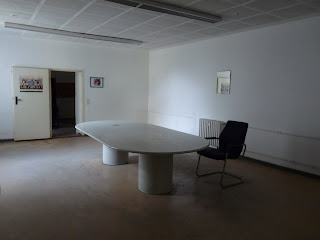 There was nobody home, not for now anyway, but I still wanted to get the hell out. Doors to the elevator were open and lit up just around the corner from the security office.
Chunko, the mad fucker, wanted a look in the basement. As he made his way down an internal alarm sounded in the office. LET’S GO!
Back up to the first floor, to our way of escape, and there... we decided to go on exploring. Walking past door 1043, I thought, “This is the point I’ll remember later when I’ll say to myself I should have left then.” The point of spurned return.
On we went to the Far Side, up up up – up to the 10th floor, the very top, where more offices awaited. These offices were brighter than the ones below, with stunning views of the city. 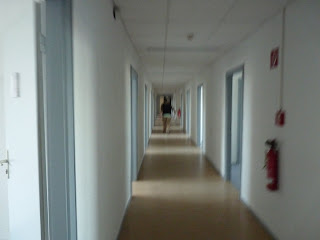 Alexanderplatz was spread out like a picnic cloth below, the Fernsehturm a candle in the middle. People-ants scurried around and tiny cars made their way to intersections to give way to little trams. No doubt the Stasi took great pleasure in observing their subjects below. I could have spent hours there.
But we still had to make our escape. We made it back down to the seventh floor, where office doors still had their workers’ names advertised, many with pictures of dogs underneath for reasons unknown even to the Stasi.
Chunko, who I’d ascertained by now was as mad as a sleepless squirrel in a Berlin winter, suggested the lift back down to the first floor. A potential kamikaze move – the lift was just around the corner from the surveillance office on the bottom floor. 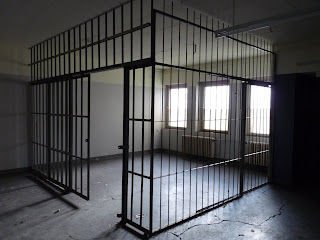 It could open to reveal security guards – but what the hell – may as well be hung for a Honecker as a Merkel.
Button pressed, and we waited for the lift. It arrived with a ring, doors opened slowly. It was empty. Thank fuck. We jumped in to the copper mirror-plated interior. Chunko pressed ‘1’ and we descended, inexorably slowly. It was then I knew security was waiting for us below. They’d observed us this whole time, discovered our escape route with the surveillance cameras, and would nab us as soon as the lift arrived. Dread swept over me. 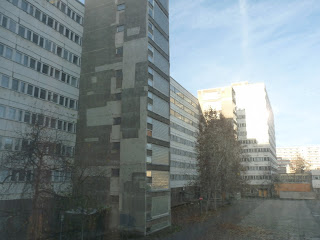 * For legal reasons we is not us, nor is us in anyway connected with me, whoever me is. See the previous disclaimer, referring to I.
Labels: abandoned buildings DDR Germany Getting in history police shady shit Stasi verboten