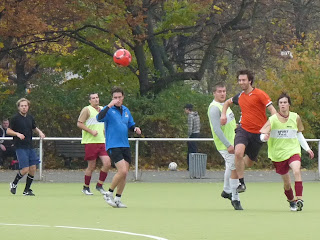 Perhaps it was fitting that Theresas Mütter should rise from the dead on Oíche Shamhna – the night the spirits of the otherworld come back to roam this one (before they quietly return in horror). Nobody imagined that my beloved football team, disbanded in apathy and then buried and mourned accordingly, could rise from the ashes to actually start the Uniliga campaign for 2010/2011.

Not only was it business as normal as we played in Neukölln at some ungodly hour on Hallowe’en morning, but we won! We actually won! Four-nil against our first opponents, Golden Devils! (So I guess it wasn’t really business as usual after all.) 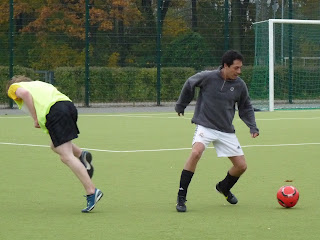 We didn’t have jerseys because they’d all been distributed after the Mütters’ “last game” in September, but that didn’t stop us as we produced a simply stunning performance to blow our opponents away. I didn’t score, but at least I didn‘t embarrass myself in front of goal. Funny how my sights have been somewhat lowered...

Theresas Mütter 2.0 are still homeless I'm afraid. Our first training session had been the previous Thursday when we were shunted from one pitch to another by the increasingly pissed-off groundskeepers. We ended up playing on three different pitches in the end, in the dark, when you couldn’t see the ball, never mind the jumpers for goalposts. 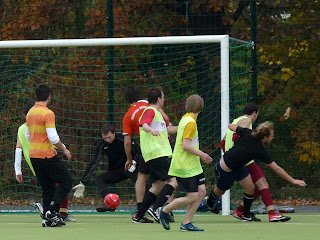 No matter. From such humble efforts come laudable achievements and getting the league campaign off to a winning start has injected a sense of determination and confidence I’d never seen before. Probably because I’d never seen most of the players before – there are very few original team survivors in Theresas Mütter 2.0 and the new players are actually quite good.

There’s talk now of finding a permanent training ground, and I’ve also heard rumblings about getting a new strip. A new strip! I’m not sure I like that idea. Surely a team’s strip is sacred and can’t be changed willy nilly. Not the home strip anyway, but then we don’t have a home so I guess it’s okay. As long as it’s snazzy... 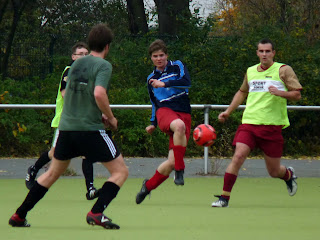 I wasn’t able to play last weekend due to work commitments, but next up in the league are the Mighty Dux in Schöneberg on Sunday! It’s another ungodly early start so one way or the other there’ll be quacks, either mine of the Dux.