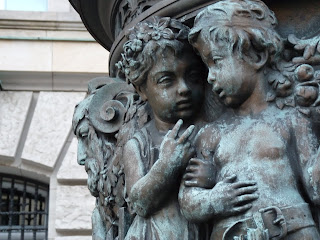 So the Geburtsvorbereitungskurs. Jaaaaysus – where to start? We were greeted by a room of mats all around a mountain of cups and glasses, coffee and tea, a huge bowl of fruit and plates of sugary shite. As if the participants’ bellies weren’t big enough. Candles and ineffective calming music completed the scene hidden from the real world by curtains. Couples filed in two by two like animals to the ark. No seats! We threw ourselves on to a mat which was to become our own for the next two days – and I was wrecked already.
I looked around at the belly parade around me and the padded doors. I wondered why they needed them. Then your wan started. Blather blather blather blather – neverending blather for the first four hours. Lunch.
She resumed afterwards with scary stories of birth and hysterics. She may as well have dimmed the lights and put a torch under her face to emphasize her theatrics. But then they really started. Padded door mystery solved. An ominous performance of what’s to come in which she screamed and panted and postulated before reverting back to blather. Then it was over; end of day one. Actual information learned: negligible.
Sunday morning resumed with more blather and scary preludes, then demonstrations of positions for the birth – most only realistic for bodybuilders or sadists – before it was mercifully time for lunch again.
Then a relaxation exercise; more ineffective calming music and we were all to lie down, close our eyes and “allow your limbs get heavy, relax your legs and arms, relax your arse...” Relax your arse! I guffawed, no doubt much to your wan’s annoyance, before she continued: “Imagine you’re at the beach, you’re looking for a place to lie, you find a place to lie, it’s warm...” Warm! It was fucking freezing outside, and I still hadn’t thawed out after lunch. I guffawed again.
Breastfeeding techniques followed, then baby-clothing strategies, before some of the problems babies can experience after birth. Nostrils might be too small making it difficult for them to breastfeed – no air while they’re slurping up milk. It ain’t easy being a baby.
However, there’s very little I can do about little nostrils – Jaysus nose there's enough to worry about already – and it sums up the fruits of listening to your wan drone on and on and on for 15 and a half hours: sackfuls of information neither relevant nor useful. Certainly nothing you don't automatically learn on becoming a parent.
The whole thing ended with everyone sitting around in a circle, eyes closed, humming "mmmmmmm", then "eeeeeee", "uuuuuuu", "aaaaaaa", and "ooooooo". I kid (ha!) you not.
Then we had to pretend the course was useful, when she asked everyone in turn for their opinion. “Well, you bored me shitless for most of it, and just scared the wits out of me for the rest.” Perhaps that was the point, although if it was, then I don’t see the point of it. 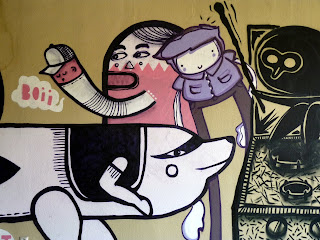 Jenny was disappointed too (not that I wasn’t expecting to be disappointed). She’s been a sponge for the last few months, absorbing voraciously from books and people to the extent where the information is contradicting itself, and I guess because of that she learnt nothing either, despite paying respectful attention throughout the Geburtsvorbereitungskurs.
Now it's getting difficult. Her contractional obligations have already begun. The nipper’s gettin’ impatient and the ordeal of birth preparation is really no preparation for what lies ahead. I wish I could help somehow, share the burden of what she's going through, but – like your average Real Madrid fan – there’s very little I can do but wave flags and support as best as I can. I’m just a passenger. And it's time to fasten the seat belts.
Labels: nipper