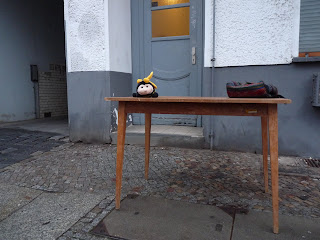 My desk is back! After three months apart following my Umzug (it wouldn’t fit in the car) and an epic journey on Saturday, I am finally typing on the comfort of something other than the kitchen table in the corner of a room not a kitchen. I hope it proves as creative.
What a hike! The never-ending U2 Schienenersatzverkehr foiled plans of simply collecting it and bringing it by train, so the only option really was for me to walk with the former Friedrich-Schiller-Universität table (don't ask me how I got it) exactly 5.4km (five and half kilometres to be approximate) home to Pankow. In the rain. 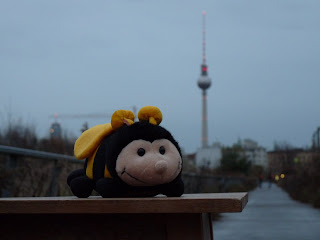 I brought Beeie the Bee with me for company, figuring we’d have something to talk about on the way considering how busy the past weeks have been.
Five minutes into the journey I was fed up already. Down four flights of stairs, banging the legs of every wall, and then an arm-aching walk towards Nordbahnhof, I realised that perhaps it wasn’t such a bright idea after all. But I’d started and so I’d to go on, past the Gedenkstätte Berliner Mauer, past what was left of the Wall and past what they’re rebuilding. (The way they’re going they’ll have the whole thing rebuilt in time for the 50th anniversary celebrations next year. Anything for the tourists’ dollars.) 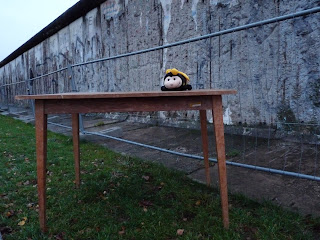 I was sweating: the arms were groaning and complaining, the heavens were opening and raining, it was getting dark and I was wondering if I really needed a desk at all, when all of a sudden an abandoned Baumarkt trolley mysteriously appeared right in front of me. It was the first abandoned Baumarkt trolley I’d seen in over two and a half years in Berlin!
I couldn’t believe it; Beeie couldn’t beelive it. But the table practically hopped on without a second invitation and we all set off down the road, past Bernauer Straße on to Eberswalder Straße where a passer-by excitedly asked me if there was a Baumarkt in der Nahe. (Germans are never happier than when in Baumarkts – they just love DIY.) 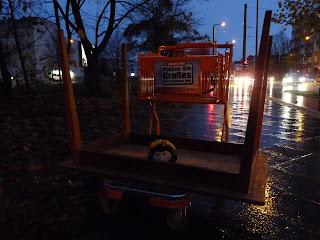 I’d been making a tremendous racket as I pushed my cart and table along, every pothole or break in the pavement producing a clattering and banging to wake the dead. And then I unwisely turned up Pappelallee where the cobbled pavement set the volume to unholy. BANG BANG BANG!!! Jesus, the noise was incredible! I tried keep the head down so no one would notice me, but of course it was pointless – heads were turned and windows were opened as residents stuck their noses out to see what the hullabaloo was about. 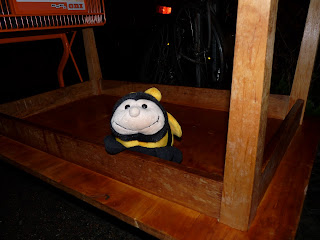 But I made it! Beeie was delighted – I was knackered. And now I’m typing on the damn thing. It’s a terrible desk – pockmarked, stained, burnt and dirty, but feck it, it’s got legs, doesn’t wobble like the markets right now, and unlike the passengers of Brianair, it doesn’t need to rely on EU bailouts.