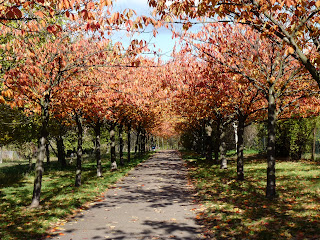 All over Berlin armies of men with gigantic ear muffs are going around with the opposite of hoovers, bullying leaves and terrorising twigs off the pavements and streets. They generally work in pairs, one man blowing all the leaves into heaps while another then loads them all up into carts to be taken away. I don't know why exactly they're doing it but locals seem to be unperturbed and I for one feel it is time to speak up against this worrying development.
It seems leaves on the pavements are seen as vermin, to be gathered up and disposed of before they dare offend anyone with their presence. No leaves are to be left for schoolkids to kick their way through, or for the wind to make dance in the air – German leaves have fulfilled their purpose as soon as they've taken leave of (or leaf off) the trees. 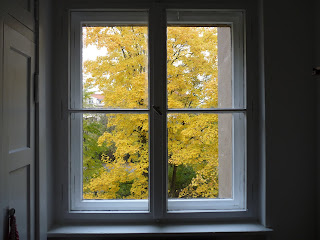 Well damnit, it’s wrong! Leaves are called leaves for a reason, and it’s because they should be left the hell alone. The colours at this time of year are simply magnificent, a pleasant distraction to be enjoyed for as long as humanly possible before we’re plunged irrevocably down the abyss of deepest darkest winter.
By a cruel twist of language fate, the German for leaves is Blätter and with it their fate is sealed: every autumn they’re gathered up be blattered. Enough is enough! I say it’s time to leave the leaves alone.
Labels: autumn weather