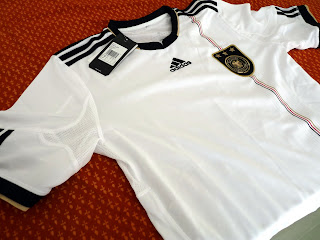 I am now the somewhat reluctant owner of a German football shirt. This country is doing all it can to assimilate me.
It arrived in the post last week as a ‘Thank You’ from Young Germany for those startlingly insightful and wonderfully witty World Cup pieces I wrote for their blog. (I’ve been reduced to self-congratulation – it’s all I’ve left to cling onto.)
Unfortunately it didn’t arrive during the World Cup when I might have considered wearing it, definitely for the game against England, and now I’m left with a straight choice of whether I would willingly pull on a German football jersey for no particular reason at all – willingly willy nilly if you will. (Isn’t that the greatest sentence fragment? Sorry, I’m at it again.) 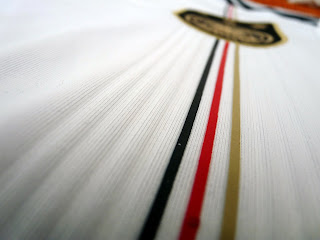 There’s something symbolic in pulling on the shirt of another country or team. In the same way I could never wear a Barcelona jersey or an England shirt, I now have to think long and hard about whether I can wear a German one.
If Germans find it hard to develop patriotic feelings for their country, what chance does an immigrant have? The not so distant past evidently still casts its shadow over this land, a land indeed only formed not so long ago. Patriotism sits awkwardly with normal Germans, and only comes to the surface at times of Eurovision wins or great sporting achievement. Right wing extremists buck the trend but these aren’t the type of patriots any country wants.
Ironically, as an immigrant it may be easier for me to develop patriotic feelings for my adopted country, unburdened of any of the natives’ feelings of guilt for the past, but too many current Germanisms repel such advances – the inability to do anything in this country without having played Bureaucracy or Bust and come back with a wheelbarrow of forms; the subservience to rules, authority and power whether it exists or not; the sheer numbers of motorists who are gobshites; the shockingly-poor customer service; the downright pettiness and pointless pedanticalness. It is a word; I looked it up. 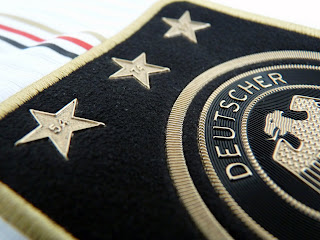 Thankfully, there are far more positives to living here than negatives – the lovely beer, the public transport, the ability to combine the two, the delicious bread, the open spaces and all the abandoned buildings to explore, and I find the locals are friendly and well-meaning, despite the infamous grumpiness of the Berliner Schnauze.
I tried on the jersey when it arrived. It fit like a glove, perfect. In fact I may never have had a better-fitting football shirt. It’s quite snazzy too, with fancy stripes and World Cup stars. Even so, no matter how tasty the Kürbiskernbrot or delicious the beer, I can’t simply throw myself into a German jersey like a floozy. Hell, if I can’t vote in elections here, why should I allow myself be Germanified? 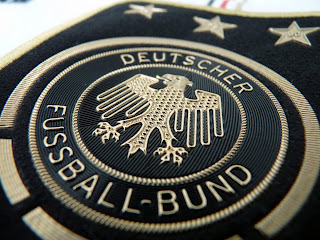 Patriotism for my homeland has actually grown now that I no longer have to endure it. Ireland is part of who I am. Friends, family and tea stay close to my heart and I remain very much an Irish Berliner.
As if to strengthen the link, there’s even a Fahey playing for Ireland now! He scored on his competitive debut of course, to get Ireland’s Euro2014 campaign up and running. Maybe he won’t be the last...
So I still haven’t worn the German jersey. It stayed in my bag with the tags on last Tuesday as I played five-a-side. I’m sure I will wear it some day. But never before has an item of clothing caused me such soul searching and reflection. How typically German.
Labels: beer bureaucracy Fitting in Fußball Germany history integration Kürbiskernbrot Tea World Cup Young Germany