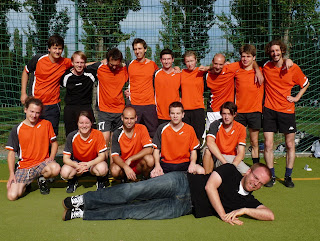 And so it ends. My beloved football team has played its last game. There'll be no Uniliga for Theresas Mütter this year, no competitive action for 2010/2011. It's a sorry state of affairs, terrible tidings which pain me to bring to the world.
We played our last game last Sunday (the 12th), a farewell against the inappropriately-named Dionysos Berlin. (Dionysos, the Greek god of wine, madness, festivity and ecstasy.) A friendly to which all Mütters, past and present, were invited. The significance of the occasion combined with the glorious weather ensured we were able to field a full team for a change, and despite it being the last act in a long drama with many twists and turns (but very few goals), the participants seemed happy to appear on stage for a final bow (perhaps because of). 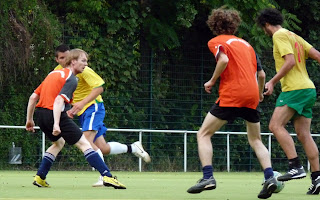 I won't dwell too long on the game itself. Of course we lost, 4-1 or something like that. I played up front and missed three clear chances. The first was a shot I drew across the goalkeeper but just agonisingly wide of the far past. The second was a sharp cross from Christian which I threw myself at between two defenders but could only direct over the bar, and the third was a cross which I volleyed first time at the keeper when I'd all the time in the world. I felt like Gonzalo Higuaín and co. as I trudged off the pitch. On another day they would have all gone in, but there won't be any other days. At least 'Pipita' will have his chances again. 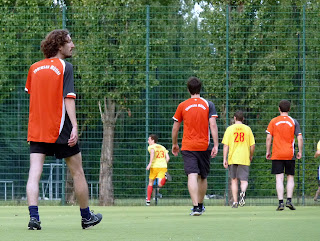 In truth, things had been looking pretty bleak for Theresas Mütter for some time now. There was little or no training over summer due to a lack of participants, but the beginning of the end was a year and half ago when the Mütters were beset by bitter internal strife.
After one season of abject performance and dismal results, it was realised our ethos and aims were incompatible. Theresas Mütter's ethos had always been the noble one of 'everyone is welcome'. This applied regardless of nationality, colour, sex, tendencies, or indeed, footballing ability. Where else would you meet José, a Barcelona fan from Madrid?
Whether you had two legs, one or none was deemed immaterial as all were welcomed with open arms. Everyone got to play in every game.
Naturally enough, this did not lead to great results in the league. There was one victory in that first year – 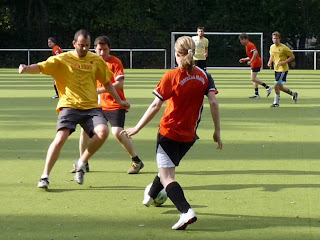 possibly still the highlight of my time to date in Berlin – but that was not enough for some who felt we should be more competitive.
The ensuring debate threatened to tear the Mütters apart, but eventually a sort of compromise was reached where those who trained and put the most effort in were favoured.
It was never the same since however – Mütters may have been more competitive, and there were other (rare) victories, but the fun was gone. The joy in winning was tempered knowing what we had had before, and I, for one, just did not enjoy it as much as I had before.
I wasn't the only one. No longer were there meals together after games, or drinks together after training. Theresas Mütter had been a team united by its ethos, but without it... 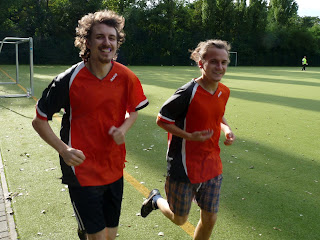 Of course, there are other reasons for its demise. Players drifted off, moved to other cities, got jobs, got injured, got lazy, found they had better things to do. Nils went to Frankfurt to study God; André officially retired from football after banjaxing his knee; Johannes likewise; Friedemann and Christophe are concentrating on their musical careers; Eoin moved back to his mammy's cooking in Ireland; Hans has to work, Jean Baptiste is moving to Switzerland; Frederico got pissed off with the whole shebang and everyone else either has something else going on or is unwilling to organise it from now on. This includes me I'm afraid – baby and work are my priorities now. 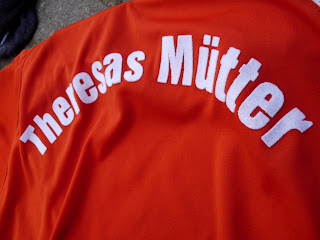 It was fucking great while it lasted, especially that first year, but it seems Theresas Mütter has had its day. I write these words with a heavy heart and a heavy cold – unrelated apart from the point of view of adjectivity. My cold will get better, but my heart will always be a Mütter's heart.

Never before have I met such a friendly group of damn good people, people who welcomed me in as one of their own and made me feel at home as soon as I arrived. I can honestly say my experience of life in Berlin has been greatly enhanced because of Theresas Mütter. This loss will weigh much heavier than any of the others.
Labels: Fußball Theresas Mütter