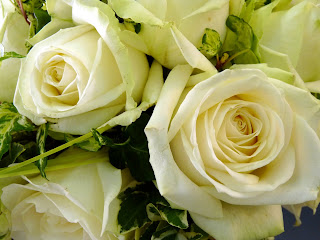 Danger Mouse came flying on her bike towards us as we waited outside the flower shop, dressed in jeans and a check shirt but with her veil flowing majestically behind her. Barely time to exchange hugs and greetings before she ran into the shop, a flurry of excited haste. And why not? It was her wedding day.
Myself and Jenny were already dressed for the big occasion - me in my pointy shoes freshly polished the night before and clothing ironed from the pointiness up, (not that you'd notice - it was flippin' roastin' and everything was crumpled after lugging a tent, sleeping bags, mattress and provisions for the night in a frantic rush not to be late for the bride on her big day), and Jenny in a fetching gown (not that I was throwing sticks for her to chase; I mean she looked rather fetching in it). 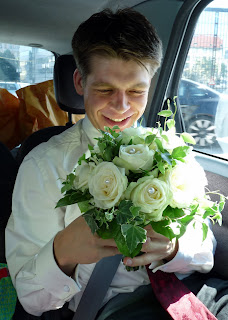 The Asian flower shop staff were as excited as the girls, chattering and laughing and wrapping and bundling, flowers everywhere, more than we'd be able to carry.
Then Danger Mouse rushed into the "American Style" nail salon next door with her bridesmaid, leaving me in charge of all the flowers in Asia on the pavement, and her bicycle and the tent and camping equipment. I'd never been in a nail salon before, so I stuck my head in to be greeted with a scene from another world. More Asian girls in white uniforms looking up from their little booths eyes wide with wonder above facemasks in front of weird lamps and crazy contraptions. They too chattered excitedly adding to the commotion while the smell was like no smell I'd ever smelled before. My suspicions were confirmed - it was going to be a mad day.
Danger Mouse had the fanciest nails in Berlin by the time they were done, and we rushed back to her apartment with arms full of flowers and bouquets, and tents and sleeping bags, for the next step of the preparation. Of course, she wasn't able to carry anything for fear of damaging her beautiful nails. 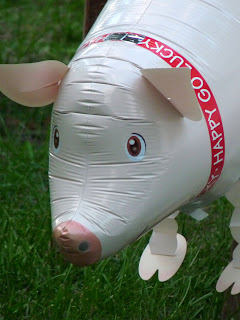 It was flippin' roasting as I mentioned before. "Ich schwitze wie ein Schwein," I announced much to the girls' amusement. Already I needed a shower.
Then the hullabaloo of Danger Mouse fitting into her wedding dress without messing either her hair or her nails. Jenny had to stand on a chair like a crane and somehow lower it over her head. As a designated photographer I wasn't allowed miss a moment and I snapped away like an impatient crocodile. Then the complicated procedure of lacing up and tying the back of it. How the hell she was going to get out of it later on was beyond me.
I'd already opened a fancy blue bottle of prosecco and was more than happy to help the bride-to-be drink it once she was ready. She posed for more photographs in front of the bay window. She had no need for the sparkling wine - she was drunk already with happiness - but she drank it all the same.
My turn to get ready then - gel in hair and about 17 attempts to get the tie just right (always either too long or too short), and we were ready! 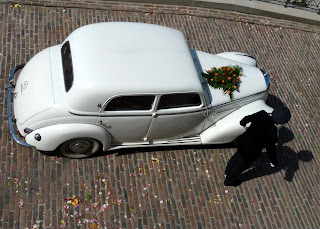 A girl with dog prints on her back picked us up and we set off. We brought the bottle of prosecco with us and Danger Mouse promptly polished it off as we drove past the Fernsehturm. Later we were ironically overtaken by the old vintage car hired for the day to bring the brides from one château to the next.
Another hullabaloo before exchanging cars down a quiet country bodhreen when a pee stop was needed. Must have been all that prosecco. Danger Mouse needed help with her dress so Jenny had to find a quiet spot for them. It wasn't quiet for very long - the world and its mother passed by, all offering their congratulations on seeing the bride-to-be and waiting wedding party. Some last minute applications of lipstick, eye-shadow, cheek-gloss and Jaysus knows what else - and Danger Mouse was ready. Beautiful. It was time to get married! 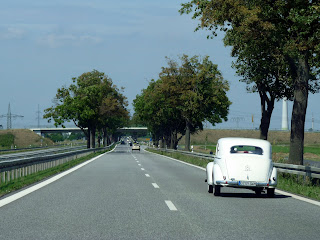 Up to the Schloss in the vintage car (we were relegated to the normal one behind), and by the time we found parking she had already made her way in. People people everywhere, all smart in suits, dresses and fancy hats, but nothing ridiculous (it wasn't an Irish wedding). Some didn't bother dressing up at all.
And there we saw Sparklehorse for the first time, clearly at the very limits of happiness, radiant with emotion, her face in danger of being taken over by an uncontrollable smile. She emanated joy and looked like an angel in her white gown.
The ceremony descended into one of beaming smiles, tears and laughs; impossible to keep the bundles of emotion in check any longer. Both brides answered the question with resounding "Ja!"s, much to the delight of the packed hall. 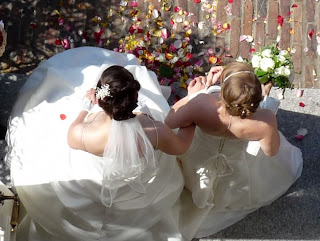 The 'marriage-maker' (not a priest but no idea what she's called) spoke of love and the happiness of harmony, prompting more tears from the brides and bridesmaids. I sloshed my way through the deluge to keep my snappy obligations happy.
Great applause greeted the official signing which makes Danger Mouse and Sparklehorse wife and wife. More tears, laughter, then a explosion of flowers as Danger Mouse's bouquet flew out of her hands in a bid for freedom. "Noch nicht!" she was told as she and everyone around her were covered in flowers.
Once the site was cleared, queues formed for a series of neverending hugs as joyful relatives and gushing friends lined up to congratulate the happy couple. Then a squillion photographs outside, before some well-earned Sekt (German sparking wine) was served on the lawn. Not a moment too soon - my tongue was hanging out for some refreshment.
Then it was off to the second castle for the obligatory Kaffee und Kuchen, wedding games, speeches, a wedding newspaper(!), Bier, the wedding cake, presents, more speeches, more Bier, before the Brautpaar displayed some very impressive log-cutting. You wouldn't believe it if you saw it, but I did and the girls did too, each one side of the said saw sawing their way to a future of harmony at the expense of the poor log.
They were wise to work up an appetite - such mountains of food would have fed an army of lumberjacks. I did my best - it was absolutely delicious - but I could only make a 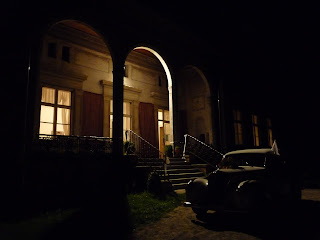 little dent despite going up for more.
Then a mini concert under 2 trees with Sparklehorse beating the drums for her new wife; Danger Mouse the picture of happiness looking on.
The first dance provided more photo opportunities, as did the dancing afterwards. Again I snapped like a snappy snapper.
The perfect end to a perfect wedding. Absolutely nothing was missing. As I told Sparklehorse towards the end: "Man könnte das nicht besser machen."
They simply couldn't have had a better one. 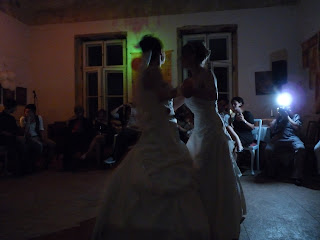