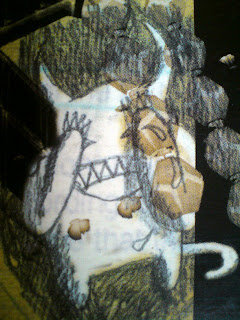 I've had to buy a new lock for my bike. Another one. Some fuckers tried steal it the other night (the bike that is, not the lock). I came downstairs in the morning to find the bike still there but the lock in a distressed state, clinging on with a deep gash through the outer casing showing the frayed inner wires bare in their moment of weakness. Don't look! Don't look!
Unfortunately the lock has had it. It died heroically, paying with its life for my bike's protection. I guess the thieves were interrupted. Another few snips with their lock-snipper and they would have had it open.
Only in Berlin do bicycles live in daily fear of abduction. More than 23,000 are reported stolen here every year according to the latest figures. The Polizei are helpless apparently, so nothing new there. It seems to be their normal state of being, unless their being happens to be a head of state, in which case they make themselves very helpful indeed, blocking off roads from commoners like me and ensuring their precious cargo VIP treatment. I digress.
The lock cost me €35 last year. Thirty five yo-yos and still not good enough!
I deliberated long and hard over what to do. Leave it out another night and let the thieves come finish the job before the claiming the insurance? No doubt I'd be told: "Tut mir Leid, your bike theft insurance doesn't cover you for bike theft."
(I've come to realise insurance only covers eventualities which never materialise, and eventualities which do materialise are no longer deemed eventualities making them exempt from cover. I'm sure it's in the small print somewhere.)
Plus that would be giving into the bicycle terrorists and we don't want that. (Anyone else miss Dubya? Obama just ain't as funny.)
So yesterday I went crazy and ordered a new lock for €70 I 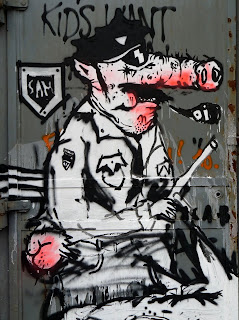 neither have nor want to spend. But it was reduced from €100 and comes with "maximum security 15". Only an atomic bomb will prise it open. If they're willing to go that far to take it... Imagine the lock I'd have to get then. Jaysus, the mind boggles.
At this rate it won't be long before the locks are worth more than the bike. But my bike is precious to me; it comes everywhere with me (40km today, story for another day, but what a story!), and I'll only go to parties if my bike is invited too.
For now though, pending the arrival of the new lock, it's cowering in the cellar after its ordeal at the hands of the fuckbag thieves. If there's one thing I can't stand it's thieves. Fair enough if you have to feed a starving child, but they sure as hell can't eat bicycles, no matter how hungry they are.
The bike is awaiting the arrival of the new super-lock as eagerly as I am. They'll probably steal that now and leave the bike. I suppose I'd better get a lock for the lock.
Labels: Bandito Berlin Bicycle fear insurance