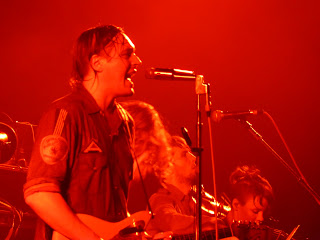 Arcade Fire rocked the Tempodrom last night. They were fantastic, as I expected them to be, all 17,000 band members playing with fire, brimstone, heart and guts. (Not literally, that would have made quite a mess on stage.) Their music soared and lifted until the venue couldn't hold it anymore. The crowd spilled out. It was over. 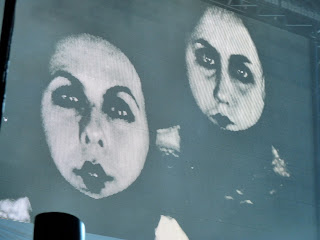 But what a concert! They all played their hearts out (again, not literally), and the main guy was everywhere, all over the stage, at times in the crowd as he out-Bonoed Bono*.
It occurred to me as I watched them that I no longer pay any attention to band members' names - it doesn't matter a fuck who's in a band as long as they produce great music. As soon as I realised this I remembered the singer's name was Win Butler, thus contradicting my original thought. But Win is a great name for him - the guy just cannot lose, and they do produce great music. 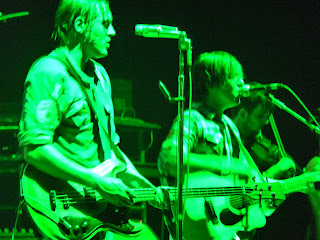 The new album's damn good but it's not brilliant, not like Funeral or Neon Bible which are stupendously good. They reached unattainable (again) levels of brilliance.
If you were to pay any attention to the local press however, The Suburbs is the best thing to have happened since Curry was first introduced to Wurst. Radio Eins and Motor FM have been falling over themselves to come up with superlatives to describe how great it is, and tickets for last night's long sold out show were rarer than pigs' manners. 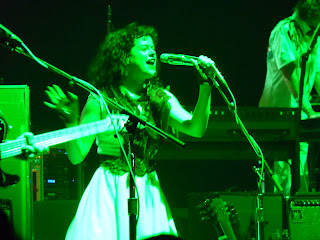 Having said that, goosebumps accompanied every captivating song they played until I could wait no more; those Weißenbiers gulped down in nervous anticipation beforehand forcing me to the pissoir. As Win contemplated the meaning of being a Modern Man, I contemplated what the hell a cleaning lady was doing polishing doors in the toilets in the middle of an Arcade Fire gig! What a country! Shiny doors evidently a prerequisite for anyone visiting the toilet during a concert in Germany. 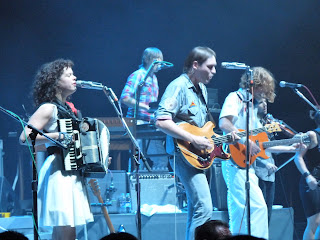 The bump seemed to enjoy the show. There was reported movement. Presumably it was dancing in there. They didn't have any extra-small t-shirts for sale though, nor indeed any hoodies to replace the one I'd bought at the outdoor (summer) gig three years ago in Dublin when it was so damned cold I asked them for the warmest thing they'd got. I was quite disappointed not to get another. I'll freeze this winter. There used to be a time I got all my clothes shopping done at concerts but this, coming as it does after a disappointing lack of t-shirts at Yann Tiersen in May, seems to indicate those days are over. 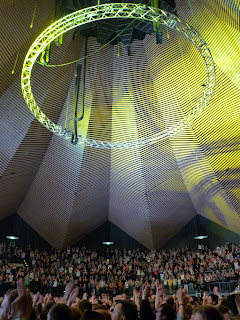 Arcade Fire have a lot to answer for. They last time I saw them was in November 2007 when I came to Berlin to do so. Four months or so later I was living here. Now they're coming to see me. I hope they come again soon.

*I take it back. Nobody can out-Bono Bono. Click on his name above to see why. (Or here.) His hair alone in 1985 makes him immortal.

Enjoy the following video. We were standing just behind the cameraperson. The girl screaming as if she was being murdered was standing directly behind me. Fantastic.