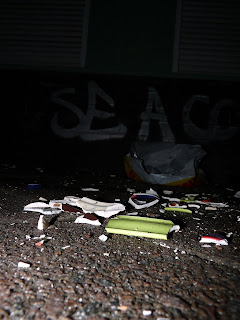 Some German customs are simply smashing. The one I was at last night certainly was. Ahead of next Saturday's wedding, the most eagerly-awaited since Miss Piggy became Mrs. Kermit the Frog, it was time for two brides-to-be to hold their pre-wedding bash... their Polterabend!
Bash was certainly the right name for it - there was more bashing at this bash than any bashes bar the obvious example of the annual St. Patrick's Day shenanigans back home.
A small group of friends and family gathered at Danger Mouse and Sparklehorse's place for a plate and pottery-destroying ceremony to bring them luck for their impending nuptials.
The 'Polter-evening' started of course with Kaffee und Kuchen (no German occasion is an occasion without Kaffee und Kuchen), accompanied by copious quantities of Sekt, and more gefühlte Brötchens than you could shake a Gürke at. After chatting, eating, drinking and toasting, it was time for the main event - plate smashing! 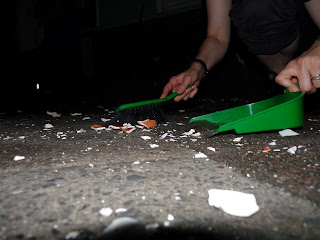 We all filed out onto the street outside their Wohnung, everyone clutching their sacrificial plate, vase, cup or bowl. There were only two rules - it couldn't be glass and it couldn't be new. These bring bad luck apparently - so running to the shop to buy something beforehand, or stealing a pint glass from the pub were not options. Unfortunately these had been my options as the only smashable things I had were smashed already in my Umzug - not that I would have smashed my favourite mug or teapot.
Jenny had grabbed some old pottery wall decoration thing left hanging on the balcony our new apartment (must have been an auld woman living there before us) and she insisted we smash it together. Danger Mouse and Sparklehorse had already smashed their plates on the pavement and there were bits of pottery scattered all around, and now they were waiting with brushes and dustpans to clean up the destruction to come. 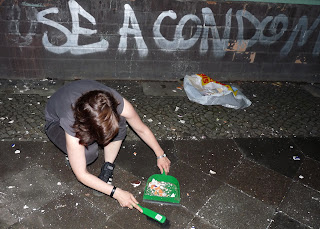 "Fling it up good and high!" I told Jenny. She was reluctant however and was still humming and hawing as we prepared to launch the pottery into the air. I aimed for the moon, Jenny was happy just to hit the pavement, and the resulting crossed-wires saw the thing fly up to the left, hit the side of the building over where the girls were standing, narrowly miss a window, before sending them screaming as they scurried away from it as it hurtled back down towards them. It hit the ground with a comforting smash. Bits of pottery everywhere. "Woohoo!"
I don't think Danger Mouse was quite so happy to be nearly decapitated however, and Sparklehorse was conspicuously quiet too. 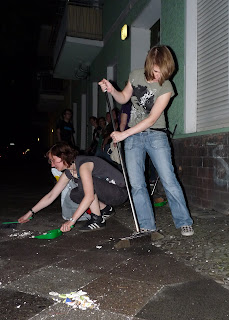 More plates and things were flung on the pavement, albeit not so dangerously, and then they got to work, sweeping up all the mess. I offered to help but apparently only they're allowed sweep it up if they're to get the good luck.
We ensured they'd have plenty of good luck - there were plenty of large pieces on the street which needed to be smashed some more, and so we took to flinging them on the pavement with gusto too.
Then a few neighbours who had heard the commotion came out to their balcony above us - and they started throwing stuff down too! There was stuff smashing all over the place, and bits of pottery flying everywhere!
By the time Sparklehorse and Danger Mouse had finished cleaning it up, I'd say the street was never cleaner. And of course, a smashing time was had by all.