Dodgy dealings are never far from the surface in Berlin. Perhaps it's inevitable in a city shaped by the Cold War and still scarred by the Berlin Wall that shady shit goes on to this day. What worries me is that I now find myself in the middle of it...
We have a problem. As mentioned in an earlier post, the apartment we're moving into is quite small. Even kitten-swinging isn't an option. There's no room for Jenny's attention-seeking washing machine, a top loader which refuses to slip under the kitchen counter.
Then yesterday, a solution: "My cousin Peter knows someone who needs to exchange their washing machine," Jenny announced with her hand in front of her mouth at breakfast.
I nodded, casually took another slurp of tea. She didn't divulge anymore, and I didn't ask. We quickly changed the subject.
I wondered however, what kind of shady characters did her cousin know, who actually "needs" to exchange their washing machine, and what were the risks involved? Should we just wash our clothes of the whole conspiracy? 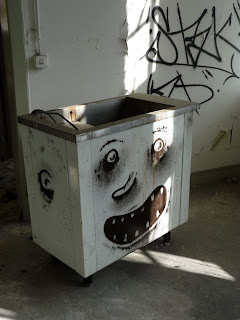 But it seems we're going ahead with it. Apparently arrangements are already too advanced to suddenly call it all off - the dangers would be too great - and Jenny is detergent to proceed.
I haven't been told yet where this proposed exchange will take place, whether in East or West Berlin, but I guess it will have to be under cover of darkness. The risks of being caught are increased due to the size of the washing agents to be swapped. We'll certainly need vehicles to transport them to and from the exchange site - otherwise we'll be left hanging out to dry.
The holder of the other washing machine is called Füschy - seriously - and apparently she's anxious to have the swap completed by this time next week. Further details are still cloaked in secrecy, but I'm sure they will all come out in the wash. One thing is for sure - no money is to be involved in this laundrying operation.
Labels: Cold war shady shit