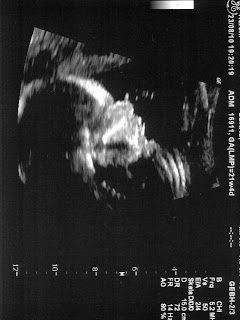 Expanding now at a frightening pace; the little thing must be farting in there. Or growing I suppose. Jenny went to the doctor again on Monday, to get special pregnancy tights pregnant women have to wear to stop their legs going weird. It's so much simpler being a man. She took the opportunity to have another look inside her belly at the little being unknowingly causing all the commotion.
I didn't get to see it as she didn't know she'd get a viewing, so I was quite disappointed when she produced another blurry photo afterwards. These viewings are few are far between and I don't want to miss a thing.
Looking at it this morning she said: "The kid looks weird." No matter what way you look at it, I have to say I agree. But I'm sure it won't be one of those kids with a face only a mother could love. It has such good-looking parents. The father's only gorgeous. Apparently the doctor assured her all kids that age (almost minus four months) look weird in their snapshots. 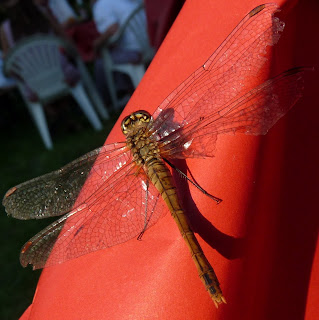 It already appears quite thoughtful, holding its chin in the picture as if pondering the meaning of womb, wondering if there's a world outside the womb and if there's any more excitement to be had there. Yes, it might be warm and comfortable but there ain't a whole lot going on inside a belly except gurgling.
That night we could see her belly moving! Then I felt it kick! It was mad, just a few days after she first felt it, to be able to see a little sudden protruding bump. The underside of a tiny trampoline. I put my hand over it and definitely felt a little bulge. It made up for missing the latest viewing - gettin' my kicks from a little one.
Labels: Life nipper