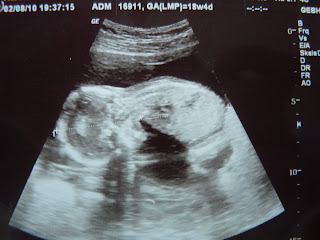 The belly’s getting bigger by the day. By the minute it seems sometimes, but Jenny assures me it’s just the cup of tea she drank.
This afternoon she felt the little nipper for the first time. First contact! She may have actually felt it for the first time last week but it was so slight she cannot be sure. But this afternoon she definitely felt “a touch”, probably as the little being is getting curious about its surroundings. “What the fuck is that?” Although I’m sure it wouldn’t be using language like that. And if it is, it certainly didn’t learn it from me.
Whether it’s a boy or a girl is yet to be determined. At the last doctor’s check up (August 2nd) he asked if we were ready to find out. Jenny deferred the big revelation for another day, saying the father wished to keep it a surprise, even as I told her it was okay if she wanted to know. (To be honest, I was pretty damn curious.) Curiosity is now involved in a titanic struggle with the desire to keep it a surprise, and there promises to be another mighty tussle between the two at the next doctor’s appointment. It'll be a surprise if my desire to keep it a surprise isn't usurped by my curiosity.
Everything is fine and in working order. The doctor was able to give us a peek again. He covered her belly in jelly and slid a slippy camera around to produce more blurry pictures on the screen for our viewing pleasure. To be honest, I couldn’t see much this time either. Either the jelly was to blame or it's fairly cloudy in there – perhaps the Irish half is affecting the prevailing weather conditions. 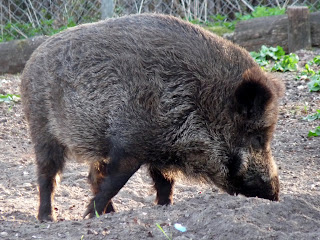 I could make out a round blob for the head and a slightly longer blob beside it for the body. Apparently 11.637 cm tall (roughly). For some reason they only measure head to arse at this stage, as if legs don’t matter at all. We did see the legs moving briefly, a little tadpole’s kick as the image flew across the screen.
It may have been trying to get away from the rain. Despite having all the organs and necessary limbs and what not by now, I’m pretty sure it doesn’t have an umbrella. Perhaps that first touch this afternoon was merely the opening address of a nipper who already has enough of the weather. With a due date in January then, now would be the time to start thinking of growing some fur.

We still have no internet at home. It's internot at the moment. So I've nipped out (making me a nipper too) to a nippernet cafe to copy this over from a USB stick. I appreciate all the comments/emails and will of course respond to them with the care and attention they deserve once we're connected to the interweb by next weekend.
Labels: Life nipper weather