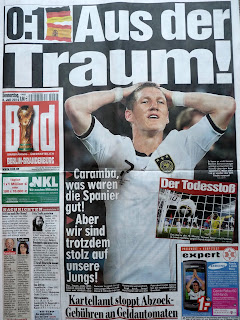 So the Deutschland dream is over. Buried in a wave of tiki-taka. Yeah, Spain were much superior to Germany and totally deserved their win, but Jaysus, how boring is it to watch them play? Pass, pass, pass. Then pass, pass, pass again. And again, for 73 minutes until they broke German hearts with a goal 'made in Barcelona'.
It got ugly here in Berlin once the final whistle went. Schland der Tränen. Everyone pissed off, crestfallen. Frustration at not getting hold of the ball, being unable to do anything worthwhile with it when they did, and the dawning of reality - things too good to be true usually are.
I was as disappointed as the rest, I have to admit. San Iker, Xabi and Sergio Ramos aside, I don't care much for this Spanish team. An anaconda squeezing the life out of opponents. The most anti-social team of all. "It's my ball!" Pretty passes but little excitement, 1-0 now a favourite scoreline. Underwhelming to the point of irritation. With the score still at 0-0, Germany actually created the better chances despite being completely dominated.
But it got ugly here as I mentioned before. Everyone on the streets at the same time, disappointed, shouting, quarrelling. The noise of smashing glass coming from across the street. Someone throwing bottles. Crash, smash! Kreuzberg jammed with people, bicycles and cars, pedestrians arguing with cyclists, cyclists arguing with motorists, a thud and banging to be heard anytime the two species met.
The ugliest for me was the sight of workers from the restaurant beside the Spätkauf where we watched it celebrating Germany's exit. They weren't Spanish or German but immigrants. Like me. One of them pretended to kiss the TV. "Why the fuck would you live in a country you hate?" I asked Jenny. She shrugged her shoulders. Some other non-natives then passed, celebrating too, laughing at disappointed supporters, drunk on Schadenfreude. Others beeped their car-horns. Assholes, I thought.
The next morning however, one could sense the disappointment receding. The newspapers spoke of pride that Jogi Löw’s young mavericks managed to get so far, with particular pleasure being taken from the four-goal hidings handed out to England and Argentina.
“The dream is over – but we’re still proud of our boys!” screamed Bild. “Keep the heads high. We’ll collect the World Cup in four years.”
I have to say, after the initial shock, supporters have been very gracious in defeat, all agreeing the better team won, and looking forward to a bright future for the Nationalelf. 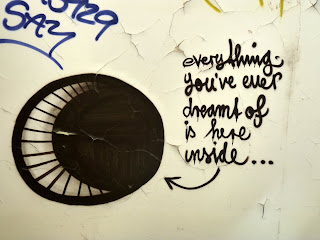 Paul the Oracle Octopus is taking the brunt of the anger now. I don't see the point in shooting the messenger, but he's been receiving death threats and featured in quite a few recipes, paella, seafood salads and the like. Apparently they were even singing 'anti octopus songs' on Berlin's fan mile. I didn’t even know such a thing existed – didn’t know octopi had so many enemies. The songs were no doubt composed by seals, whales, sharks and the like.
Paul's become a hero in Spain however. "Viva Pablo el Pulpito!" my mother texted me after the game. The place has gone bananas. They were dancing in the fountain on Madrid's Puerto del Sol, one fella bollock naked running through the middle of it. San Fermin, the famous running of the bulls in Pamplona, also kicked off this week. There wasn't enough reason already for a fiesta.
Ah yes, I know where I'd like to be now. It will be a crazy party if Spain do manage to claim the World Cup on Sunday. Paul has predicted they will. For his sake, and despite my misgivings, I hope they do too.