It's official, there's a bump! It's been there over a week now actually, but Jenny only admitted as much yesterday as her belly protruded undeniable evidence. 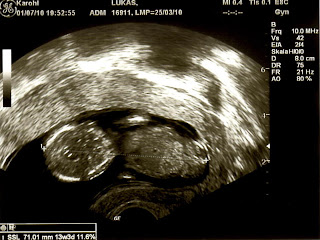 We could have a revolutionary on our hands. The bump first appeared on July 14th, Bastille Day, at precisely 10.22pm. However much the mother may have denied it since, both the bump and I agreed, and we were vindicated yesterday when she finally admitted defeat. Vive la Révolution!
Apart from that there's little to report. We haven't been to the doctor since so there are no new obscure pictures of dark blurry shapes or shadows to decipher. (Photo to the right is from the previous visit.) We can only presume it's bigger if it's making a bump for itself, and if it kept growing at the pace it had set for itself it must be the size of three large spuds now.
I've been looking stuff up, and its cheekbones should be visible at this stage. (To who I don't know.) 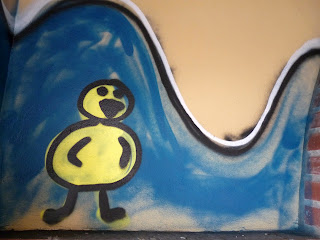 Its legs should have grown longer than its arms, and its body should be longer than its head. So, all coming along nicely then. Apparently, the kid's kidneys are producing urine - I'm sure Jenny will be delighted with that - and the sex can be determined if you're so inclined. Jenny is, I'm not. We'll cross that bridge when the time comes. The first hair will be appearing now. I just hope it won't have dreadlocks - tattoos are fine - but dreadlocks don't make for speedy deliveries. Probably where they get the name.
Its ears should be fully developed now, but I'm not sure if that means it can hear or not. I hope so - we'll be going to see Arcade Fire at the end of August, so I'd feel we're getting more value for money if the Würmchen could hear them too. As long as it doesn't expect a t-shirt too...
Labels: Arcade Fire Life nipper