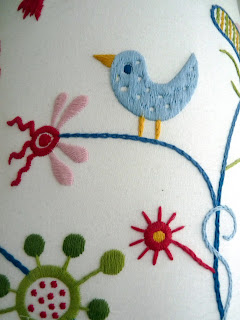 Thanks so much for all the kind comments, excited messages, phone calls, words of encouragement and offers of support. ("Holy fuckin bananas" was up there with the best of them.) Also the pictures and anecdotes from proud parents of the happiness brought upon them by their own little monsters. I have to say it's all been very warming and reassuring, and helped me realise we're not alone.
Nothing's more important in life than life (not even football). I've digested this fact and am learning to cope with being responsible for it. There's already been a change: doubts are fading, fears receding. Somehow I'm much more confident that we'll manage. I'm sure everything will be okay.
The Würmchen is now 6.93 cm long. A flippin' giraffe. We went to see the gynaecologist last Thursday. Those guys get away with murder, but I won't get into that now.
This time I went in with Jenny and we could see our creation on the screen. Its head is as big as the rest of its body (its father's brains then) and the doctor pointed out its arms and legs and arse. Again, it was all very blurry, but Jenny could see it moving, (I thought it was just your man moving the camera around). 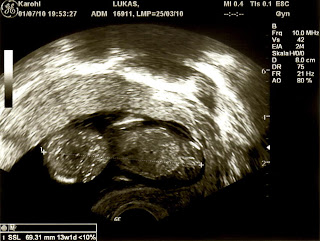 I was surprised it even had arms and legs. I'm sure the kid is too. It's probably wondering what the hell these things are for. But they'll be handy later on. Literally. Well, the arms will be anyway. The legs will be feety I suppose.
Apparently it's even developed fingernails and toenails. Couldn't see them of course. It can suck its thumb and get hiccups. Probably not at the same time. Next it'll get fingerprints (hope it picks nice ones) and then it can start flexing its arms and kicking its legs (just in time for the semi-final on Wednesday).
It's all a bit mad, but everyone's healthy and that's the main thing. The rest will fall into place. One step at a time.
Labels: doctor Life nipper