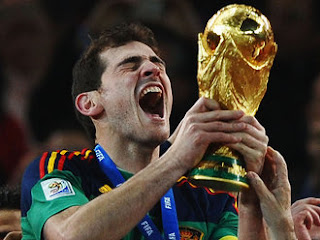 If we had just listened to Pulpo Paul and given the trophy to Iker Casillas like he suggested in the first place, we would have been saved the ordeal of a brutal World Cup final. The players - Xabi Alonso in particular - would have been spared the ordeal of Holland's kicks, and the referee the ordeal of "the most difficult two hours" of his career in which he issued 14 yellow cards and one red and should have issued more.
While technically perfect, Spain are surely the most boring team ever to have won a World Cup. They scored eight goals in total - the lowest for any world champions ever - and only have San Iker to thank for keeping their hides in it at all. The captain made crucial saves throughout, most notably Robben in the final. Simply put, without him they wouldn't have won it.
Again Spain were happy to pass the ball around amongst themselves as they indulged in 'tiki-taca' between fouls. It took them 116 minutes to score, when Holland would have been ahead but for the aforementioned San Iker and a desperate lunge from Carles Puyol.
La Furia Roja may have been the best team in the competition, but only if possession is a cornerstone of greatness. Forget the aesthetics of passing the ball around in the middle of the field far from the danger area, the basic point in football is to score and Spain failed miserably in that regard. Four 1-0 victories in a row is not a sign of greatness. Although they certainly weren't complaining on the plane home...
Germany provided far more entertainment at this World Cup, creating more chances than their Spanish rivals and scoring twice as many goals. Crucially though - even with Jogi's lucky blue jumper on board - none of them were against Vicente del Bosque's men. They salvaged some pride against Uruguay but ultimately it was a hollow victory considering what could have been.
Overall, a pretty disappointing World Cup, with low standards of football compared to previous years. From an Irish point of view, the highlight was undoubtedly watching the French self destruct - incroyable! - closely followed by watching England's bubble burst again. Even the Three Lions' attempt at a coup was upstaged by their friends across the channel. "We couldn't even do that properly!" remarked one Englander I know.
Now that the whole thing is over South Africa is left to pick up the tab. For us non-cephalopods life returns to normal while Paul the psychic octopus can look forward to resting his weary tentacles. The undoubted star of the World Cup has opted for retirement, just like the great Zinedine Zidane four years ago. 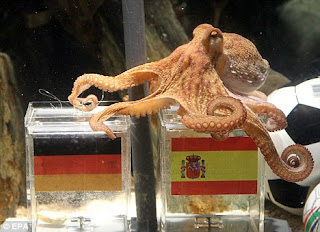 Both used their heads to great effect in their respective tournaments, but the Oracle Octupus was more consistent with the use of his, correctly predicting all eight matches he was asked to and making a mockery of his chief rival Mani the psychic parakeet who declared Holland would win the final. Psychic my arse...
Pulpo Paul was presented with a gold cup for his perfomances on Monday; a replica of the one San Iker got his tentacles on the day before. Despite containing three delicious mussels however, it was ingnored by the 'Okrakel' at first. Maybe he's not ready for retirement just yet. Frenzied transfer speculation is now linking him with a big money move to Madrid. The lure of that World Cup trophy might just bring him there.


This is the last World Cup post from me for around four years or so. Also appears on Young Germany.
Labels: Fußball Germany Paul the psychic octopus Spain World Cup Young Germany