Spreepark attractions (Another brush in an abandoned fairground) 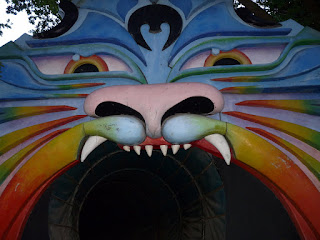 As soon as I landed over the fence with Clack Clack we stopped. Looked around listened. We'd barely gone half a metre through the bushes when a man appeared just in front. On the path. His head and shoulders suddenly out of nowhere above the foliage. We crouched down, froze, dared not move. Fuck! We waited. He walked on. Without a sound. Thank Christ, he didn't see us.
"We'll have to be careful," I told Clack Clack behind me. "That was a bit close!"
We inched forward carefully through the bushes. A quick look up and down the path, no one there, okay let's go! I was back in Spreepark, for the second time in almost as many weeks, the dinosaurs, clowns and spirits of the trees drawing me inexorably back.
We tip-toed our way up the path, staying close to the sides in case the security man was waiting for us. Perhaps it was a trap, a ploy to get us out in the open so he could strike. After a quick look at the abandoned water slide cars, full of the leaves of nine falls, we continued past the lake they would once have shot into, home now only to a multitude of frogs or some crazy-sounding ducks. 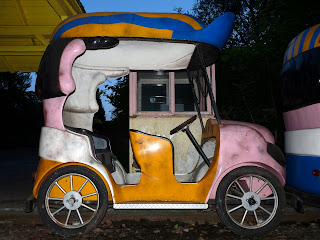 On to the rollercoaster still and silent, the baboon head gaping and inviting, a quick wander down the dark tunnel of its throat, and then on to the moustached cars with bowler hats in the forest. The ferris wheel looked down on us as we scurried around. Again, just like the last time with Jessie, it was getting dark, and I was anxious to get to the main attraction before we couldn't see anything at all.
"It's a bit risky now," I warned Clack Clack. "We'll have to leave the cover of the forest but it's worth it. We'll be out in the open and there's a good chance there's humans just behind, but we can't come here and not see the next things."
She nodded in agreement. She looked scared but happy. Let's go!
As soon as I we got out into the open I knew something was wrong. The brontosaurus was on his side, the tyrannosaurus-rex was gone. The triceratops was still standing, but there were now a load of giant white swans right behind him. They weren't there before. And where was the tusk-less mammoth?! Someone had been messing with the dinosaurs! Everything was changed, everything was wrong.
Clack Clack was oblivious of course; she hadn't been here before, and she looked around eyes wide and mouth open taking in all the wonder. "Wooooowwww!!!"
Suddenly I see see legs approaching. His body hidden by that of the triceratops, two human legs, very much alive, coming towards us. Damnit. Clack Clack sees him too, signals with mad hand gestures, says some stuff I don't understand. I give her the thumbs up. She withdraws behind back into the forest. 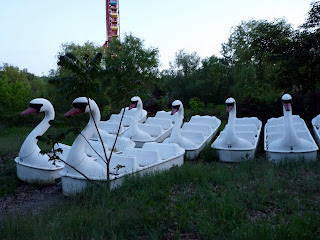 I'm drawn towards the swans however. Something's going on and I have to know more! I whip out the camera and am still snapping even as the guy bursts through the bushes just a few metres away.
"Halt!"
I put the lens cap back on the camera and start walking away.
"Halt!" Warte mal!" (Stop! Wait!)
I put the camera in my bag and keep walking.
"Halt!! WARTE!!! HALT!!!"
I keep going.
"Willst du mich VERSCHISSEN?!!! HALT!!!" (Are you shitting me?! STOP!!!) 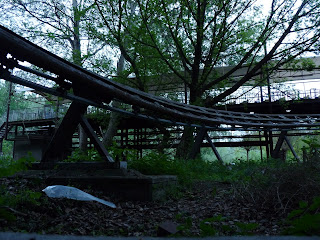 I start running. He follows suit. I realise I'm running the wrong way however, so I quickly stop, turn around and start running towards him. I figure I can outrun him anyway, and I dodge him as he makes a lunge for me. No way he can catch me now, as I burst through the trees to head for the fence. There's no good spot to escape however, and I run along the perimeter with the fence tall leaning in over me. A dog starts barking and snapping on the other side. What the fuck?! A man shouts, pulls him away. Thankfully not a guard dog, just a guy out for a stroll beside the river, but I still can't find anywhere to make an escape. I'm trapped! I find the stump of a tree however, scramble over and hurtle myself over the fence.
As soon as I'm over I realise Clack Clack's still inside. Damn. I don't know what to do, no way of getting in touch as I don't have my mobile. I don't even know if she knows I left. I realise I have to go back in to get her. Jaysus. I run down away from where the guard was, find an accessible part, and hurl myself back in over the fence again. 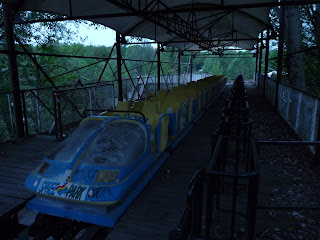 I quickly run the forest, back to where we were, back to the moustached cars with bowler hats - I figure she'd have gone back to what she knows, albeit vaguely - but there's no sign of her. I don't know what to do. I wait, listen, but can't hear a thing. I can barely see a thing either - It's getting dark too.
I go back to the fence, climb it and call her name. Nothing. Again, louder, I can her name. "Yo," I hear in the distance, back towards the dinosaurs. I run back along the outside of the fence, back to where I think she is. "I'm outside! Get the hell outta there!" I shout.
She got out, but not before more frantic searching along the fence for a spot to climb out. It seems it's easier to get into Spreepark than get out.
Maybe that's why I'm constantly drawn back. And now that I know there's something fishy going on, I simply have to go back again! 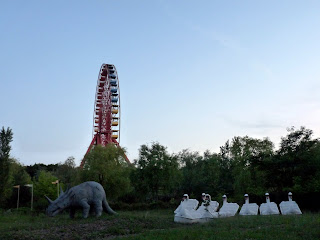 I wrote about Spreepark before; a visitor guide with the history and how to get to it and get in, the cautionary tale of the last brush with security, and a bit about Norbert Witte, the guy responsible for the whole thing. If planning on some snooping, be careful - it's evident Spreepark is no longer as welcoming as it was when 1.7 million used to visit every year.
Labels: abandoned buildings Berlin Getting in security Spreepark