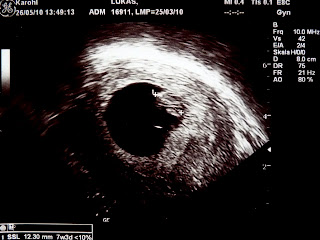 I came out of the shower to find Jenny left something on my pillow. She was smiling. Kind of. "Look," she said.
I looked. A white plastic stick two bars in a window. She had thoughtfully left the instructions beside it. I picked them up. Two bars = schwanger, one bar = nicht schwanger. I looked again. Definitely two bars. The instructions said the bars may be faint and may disappear after ten minutes or so. These weren't faint and they weren't disappearing.
"Wow," I said.
"We're gonna have a baby!" said Jenny.
I kissed her. "Cool!" I didn't know what else to say.
I went to work with a hurricane in my head. A thousand knives chopping at my brain. Nothing real anymore, nothing important, nothing mattered at all. It was my second day in Bild. I wondered how we were going to manage, how we could cope. The job was badly-paid and only for three months in any case. Then I'd be looking again.
The first doctor's appointment was a week later. I took a couple of hours off to accompany her. She was all dressed up, smiling, looking very smart, while I'm sure I looked like shit. I was sweating internally, heart in my mouth, eyes black, worried. "You look very serious," she said.
"This is very serious," I replied.
She still looked happy when she came back out from the doctor's office. "Well?" I asked her.
"I'll tell you outside."
We sat on a bench at Schönhauser Allee, opposite where I'd first kissed her before running away nerves a jangle while she waited for a tram.
They were a jangle again now. She told me everything was okay. Everything healthy, no problems. She'd seen it moving and could hardly contain her excitement. It was 1.32cm long apparently. She showed me the photo, a shape on a dark square of paper. "That's the head, that's the legs..."
Suddenly it was all very real. I bowed my head, couldn't look her in the eyes. Tears came to mine. "How the fuck are we going to manage Jenny?" Doubts, fears flooded my mind. We'd been through a turbulent couple of months. "Hey," she said, "we'll be fine." She held me as I cried, tears rolling down my face, tried reassure me. Thank Christ she was much stronger than I was. I gathered myself and went back to work.
I was sick with worry. I cried again the next week when I told Dáire. They just came out of nowhere, suddenly rolling from my eyes while we sat in a café jammed with people. He comforted me too. "It's alright. Everything will be okay."
Talking to him helped. Somehow. He went home at 6am and I hurried back to Jenny's, kissed her, told everything would be fine. Then I fell asleep. We'd all day Sunday to talk, make little plans for a little family. We agreed on a load of things and it felt good. Calm, happy.
The next doctor's appointment was June 10th. Still I was worried, but everything was fine. "Unser Baby wächst und gedeiht!" It was 3.27cm, two and a half times bigger in three weeks. At that rate it'll be a monster. "Es geht ihm gut." Another cryptic photo and a due date: January 9th.
I told my parents last Saturday. "I've a bit of news for you..." I didn't know how they'd take it but they were delighted. A million congratulations, happy down the phone. "It had to happen sometime."

Everything now is different. Upside down and unknown. Everything is of the greatest importance. Significant, magnified, immense. Everything considered at once, dissected, weighed, intense; exposing insecurities, instabilities, fears and doubts. No longer possible to take one day at a time. 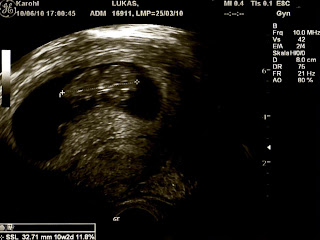 I consider the implications of being a father. Naturally I want to be the best damn father possible. I'm sure Jenny will be a great mother; she's handled it so well so far. I'm not in a great position for either of them though. More ends to meet than before, and my contract's up on August 18th after which it's staring down the barrel of unknown. Hand to mouth isn't good enough now - work is a priority.

We'd talked about kids before, but obviously I'd like to have been better prepared. I guess the baby's already showing his/her father's impatience. I haven't dealt with it well so far, and can only admire Jenny for how she has. Time to get myself in order.
"Soon we'll be celebrating another," I told her on her birthday. "Two!" she reminded me. She was right of course, but only one is important now...
Labels: Life nipper