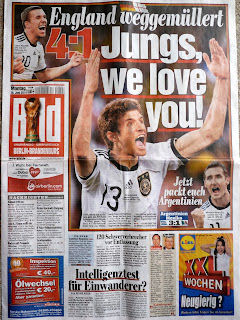 Now the French are out of the way with the unexpected bonus of more Schadenfreude than we can possibly enjoy, Irish World Cup ambitions revert to seeing England knocked out as soon as possible. For me personally, this takes on added significance as the task falls to Germany, the country I now call home.
As an immigrant in this oft-misunderstood land, I admit the idea of German patriotism is one which sits somewhat uncomfortably with me. As an Irishman, my country of origin will always be in my heart - as I'm sure it is for any immigrant in any land - but Germany is probably where the process of integration and taking pride in the country is harder than most.
Recent history plays a huge part in this of course, casting its shadow still, while for me the niggly obsession with rules - waiting at red lights when no cars are coming and so on - also prohibits me from fully committing to the cause. While I'm now a Berliner, I'm very much an Irish Berliner.
Watching Germany take on Portugal during Euro 2008 with Theresas Mütter, I fully expected my teammates to get behind their team. A few of them however, did not. René actually hoped Portugal would win. "I don't think Germany is ready to be patriotic," he told me.
Not all Germans feel this way of course. Jenny says something changed when the World Cup was hosted here in 2006. Suddenly it was acceptable to take pride in the country. Flags adorned balconies and cars, fans wore Deutschland jerseys, and wherever you went, people got behind the team as its Sommermärchen brought everyone on board.
Even now however, I notice Germans are reserved when it comes to supporting their country. Sure, there are flags on balconies and flying from cars, but they aren't hanging from every balcony, flying from every car. Not everyone is painted in black, red and yellow. 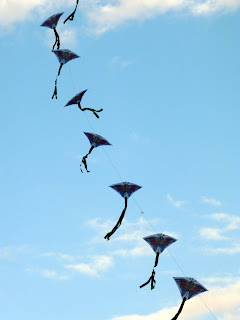 I compare it to Ireland during Italia 90. The 'Boys in Green' had qualified for a World Cup for the very first time and the country went ballistic. Absolutely crazy. Flags everywhere, Ireland jerseys everywhere, walls and windows painted green, the team's World Cup song top of the charts for weeks on end, shops closed, kids dreaming, women dancing, grown men crying; even the dogs on the street barking for Ireland! It was incredible.
Since those heady days when dreams could come true, the Irish have had resort to taking pleasure in seeing England flop. A long history of animosity means it has become a favourite pastime to take pleasure from our neighbours' misfortune.
Germany have never needed any extra motivation to beat England, but they'll have the support of the Irish in any case. For me, der Klassiker can only help my integration. Certainly, this Irish Berliner will have no problems shouting for Deutschland later!