Liberated by the twenties 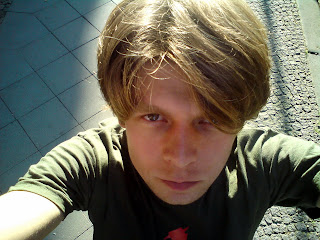 Finally a real haircut! A noticeable difference this time! I went back to Haartari on Friday - put my hair's fate back in the hands of the stylish gay guys at the arty place with the classic furniture - and gave Stefan carte blanche to do whatever he wanted.
"Mach was du willst. I don't care anymore. Just make sure the hair is out of my eyes. Es ist ärgerlich."
He ran his hand through my hair, a moment of panic before he found it again, a harp intake of breath and then: "Wow."
He put his finger to his lip, pondered thoughtfully (as if there was any other way to ponder), and then I knew I was in good hands. He told me straight away he'd cut the back so I wouldn't look like MacGyver anymore, and assured me I'd be able to see as soon as he'd finished.
"It will be very cool. Something from the twenties," he said.
I'd no idea what was in during the 1920s, my memory not stretching back quite that far, but somehow I trusted Stefan completely. (Berlin always seems to be behind the times when it comes to fashion. I thought it was still in the eighties, but the twenties. Jaysus.)
Despite him being covered in tattoos and having earrings where no earrings had business being - (picture here, the guy in the middle) - he exuded calm and I was already at the end of my tether. Really I couldn't have cared less what he did, twenties or not. I was all haired out.
The chainsaw came out and Stefan got to work. Above the din we'd the best conversation I've ever had with a hairdresser, all about the beers of Germany and whiskeys of Ireland. I knew more about the former and he the latter. He told a crude joke featuring Sterni and piss, and took a break half-way through to see what the ruckus was about outside when some freak with even more tattoos and piercings started shouting and roaring as he pushed his trolley up the street. 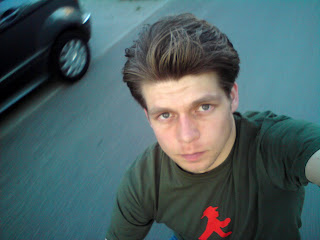 "Na ja, Friedrichshain," he said as he came back in.
"So ist Berlin," I agreed.
I literally felt the weight lift off my shoulders as he cut the haystack down to size, and the liberation of no longer having a veil of straw in front of my eyes anymore has given me a new appreciation for things around me. After all I can see them again!
(I'd been so distracted by the mop in my face that I very nearly forgot to take pictures. I managed to take one just before I went in with my phone, and another as I cycled home when I nearly ran into a tram. Thanks to Stefan I was able to see it on time.)
Labels: hair Haircut Vanity