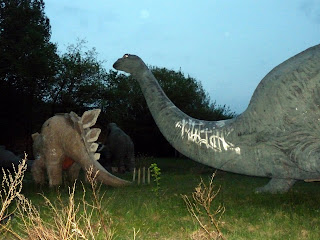 Get down! We flung ourselves to the ground, flat, fast, fearful, face in the dirt, hearts pounding, nerves jangling, pulses racing. The car zoomed up the road. I dared not look, barely peering through the foliage. Jessie grabbed my arm. Shit. They're stopping! A door slammed. Voices. Laughter. A man's voice. Brash, loud. Fuck. Run Jessie, run! We bolted, running behind the giant monkey head where we flattened against the side. Did they see us? They must have seen us. How could they not? We waited, waited to be caught.
We were in Spreepark, the old abandoned fairground beside the Spree, home only now to forgotten dinosaurs, neglected Ferris wheels and unwanted amusement rides. We'd already ignored the "betreten verboten" signs, hopped over the chain-link fence, past the looming trees, shadows ominous and inhospitable, and made our way along the broken road to where we found ourselves now, 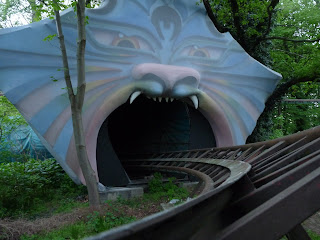 hiding behind a giant monkey head afraid to even breathe.
I'd already warned Jessie there may be guards on the site, if not the guy who oversaw its demise, but we didn't expect them to be patrolling in vehicles. What the fuck? What would they do when they found us? Ring the police? Lock us up, beat us? Through a gap at the bottom we peered out, watched as a man approached talking with another waiting by the car. There were four of them altogether, two girls too. I could just see his legs, coming closer and closer. He was just in front of us, the other side of our hideout, still talking with the others behind. Jessie gripped my arm like an eagle clasping its first kill after a long fast. Shssshhh! Stay still! Don't breathe!
Suddenly she dropped to her knees and began furiously typing on her phone. What the hell was she doing? Calling for help? Writing her final will? I peered out again underneath, used my camera to get a better view, but I couldn't see anything. The man was still there though. We could hear him, calling back at the others. No idea what he was saying.
We waited for fucking ages, an interminable suspense, before he eventually went back to the car. Doors slammed again and the car drove off. Silence. Phew! We could breathe again. We peered out cautiously. Maybe it was just a ruse. Maybe he was still waiting, waiting for us to come out before swooping. We ran behind a tree and waited again. Okay, nothing. It's all clear! 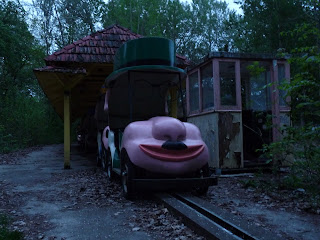 "What do you want to do?" I asked Jessie. "Do you want to leave or do you want to go on?" I didn't want to be responsible for her having a heart attack.
"This is fucking brilliant!" she replied. Grand, we'll go on so.
We tip-toed back out onto the road. Light was failing and twilight ensured shadows loomed everywhere. Okay, let's go! We checked out the roller coaster, rusty, rolling and coasting no more, then some cars in the shape of bespectacled moustached heads with bowler hats stopped as if in protest in the forest. The tracks still snaked their way around the trees but the cars had long before given up. 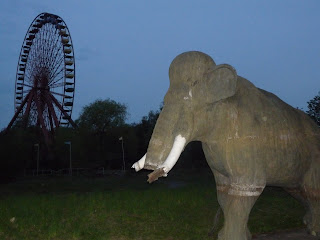 We went on towards the Ferris wheel and found the dinosaurs scattered all around, some on their side as if toppled by a giant bowling ball, a couple of them beheaded. The poor tyrannosaurus rex lying on his side, his severed foot the only part of him still standing. The brontosaurus still upright, no bowling ball big enough to know him over, and the unfortunate mammoth was long overdue a visit to the dentist.
It was almost dark so we had to hurry. We went on to some buildings at the back where I noticed another car was parked. We have to be careful! We ducked into a shed but it was too dark to see what was around. Of course we hadn't a torch. With the infra-red from the autofocus on my camera we could make out various shapes, objects. Boxes were piled up haphazardly. Then a load of medicine behind a door, plasters and medical supplies, two black bags underneath. Weird shit going on here, I said.
We went further in, poking around at the boxes. Jessie walked on a bit ahead but it was too dark to see her properly. The infra-red bathed the room in red light again. Okay, there she is. I looked back at the doorway and saw the silhouette of a man. I froze. Fuck! Did he see us?! He shone a torch into the room. Run Jessie, ruuunnn!!!! I shouted in a whisper. We ran. Through a gap at the back of the shed we bolted. Through the trees behind. 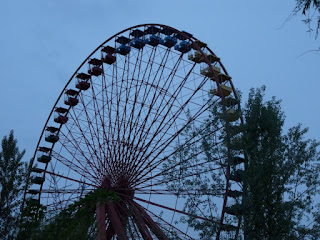 We just ran through branches. I'd no idea where we were going, couldn't see what was in front, but just ran and ran, through bushes, breaking twigs, tripping over branches, but still we just ran and ran. I'd no idea if he was behind us. I envisioned a hand grabbing me from behind. We just ran.
We got to the fence. It was leaning in towards us so was quite tricky to get over. I gave Jessie a boost first, threw her the camera when she was over, and flung myself over too, head first, legs in the air, before landing on the other side. Okay, let's go! We walked quite briskly away, casting furtive glances back through the trees to see if we were being followed. That was close! 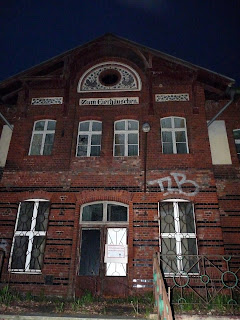 Before long we came to another abandoned building, Zum Eierhäuschen, an old restaurant and guesthouse first opened in 1837 but no longer in business after it was closed in 1990. It's now surrounded by a link fence.
"I've always wanted to get in there," I told Jessie. We circled the perimeter.
"Sure we may as well go in, now that we're here," she said. "Just for a quick look."
I propped up the fence with a couple of branches and in we went. A door was ajar to the cellar and I thought we might be able to get into the main building from that but there was no way up.
Jessie was reporting on the situation to her pals on the phone. "Yeah we were just in an abandoned fairground park and we nearly got caught. We had to leg it through the trees to get out and now we're in the cellar of an old abandoned house in the forest."
Suddenly through the trees I saw a man with a flashlamp approaching. "Hang up! Hang up!" I told Jessie. We flattened ourselves against the wall. The man stopped. He noticed the propped up fence. He took away the branches, righted the fence and waited, wondering what to do next. Had he seen us? Bhí mo chroí i mo bhéal. He shone the torch in at the doorway, the beam flickered across the wall. 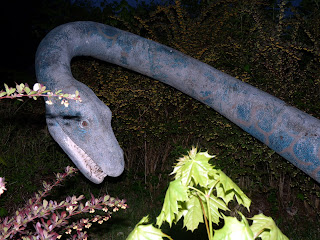 He circled again, shining the torch in through the windows. I almost became the wall I was pressing so hard into it. The yellow light danced across the bricks but crucially not across us. He gave up. The torch disappeared and he walked off.
That's enough, let's get the hell outta here. We lifted up the fence and managed to squeeze our way out. We'd to walk past Spreepark on our way back to the S-Bahn, the trees mocking us from behind the fence, each one of them holding a possible security guard just waiting to grab us as we passed. It was a brisk walk. Only when safely on the actual S-Bahn did we dare breathe normally again. 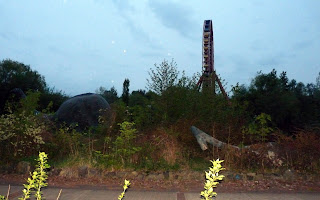 I wrote about Spreepark before and how one can reach it and get in. Further information you'll find here: http://www.irishberliner.com/2009/06/spreepark-and-how-to-get-in.html
Just watch out for the guards!
Labels: abandoned buildings Berlin Getting in Spreepark