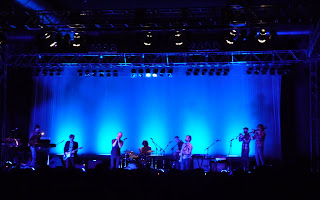 Nationalismus struck Berlin again this weekend but thankfully this had nothing to with hysterical little men with bad moustaches, anti-semitism, or a feverish desire to have the world populated only with blue-eyed blondes. There was an element of fanaticism involved however, as I saw the same band twice in two days for the first time since U2 used to be good.
It could only be The National of course, as I went to see them with Jenny at Huxley's Neue Welt on Saturday, and then again last night with the wonderfully-named Adonis at Astra. They were fucking brilliant, amazing, and I'd go see them again tonight if I could. (The National I mean, although I'd like to see Jenny and Adonis again too.) I'd goosebumps for almost the duration both nights, and the music is still in my head as I type.
It may have been The National who convinced me to come to Berlin, the urge to throw everything away and start again from scratch, everything to lose, more to gain, totally irresponsible, utterly romantic, inescapably beautiful, the feeling there's simply more to everything. There is.
Moving lyrics and songs that lift the soul, fill the heart, urge you to scream, cry, throw your arms up, kick the person in front of you - especially if she's a fat heap wearing a hat who keeps moving her head directly in your line of sight...
It was this weekend I discovered Germans are just too damn tall for my liking. I'm no midget, but they all decided to stand directly in front of me, the tallest forcing their way to the front so they could block everyone else's view. They should be banned altogether. 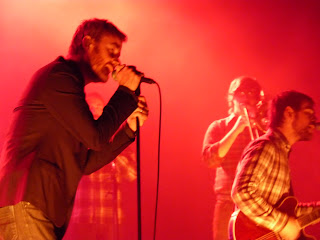 It's a definite disadvantage going to a concert in Germany, compared say, with going to one in Perú or Guatemala where the tallest native only comes up to your knees.
Another noteworthy phenomenon at German concerts is the handing out of ear-plugs at the entrance. Ear-plugs! At a concert! I can't say too much about it, but when I go to a concert I want to hear every note, every chord, every drumbeat, every scream, at a volume to wake the dead.
Thankfully The National were good and loud, and despite not being able to see much of the Matt Berninger, especially when he went bananas and jumped into the crowd at the end, I could certainly hear him. And damn was it great.
Labels: Music