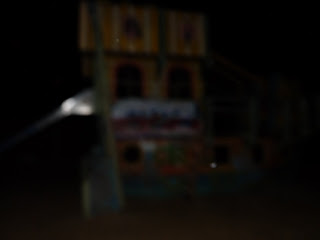 An unhealthy weekend, both for body and for soul. Ronan arrived over from Cork with two buddies of his and the only sightseeing centred around cafés, pubs and nightclubs.
They found plenty to look at however. "How are the women so beautiful in this city?" they asked the taxi driver on the way down to Kreuzberg as we headed towards the Karneval der Kulturen.
Earlier, Ronan had observed that no two women are dressed the same in Berlin. Each has their own unique style. "It's quite remarkable." Aaron was doing his best to get to know all of them, while Steve was happy to enjoy the company of whoever was present there at the time.
"Outstanding," said Ronan as he spotted another one.
There were plenty of other outstanding specimens at the festival, on both sides of the scale, as the "Carnival of Cultures" ensured thousands of people of all shapes colours and sizes. Dreadlocks abounded and the atmosphere followed suit, lazy but lively, relaxed yet intense. Excitement bubbled in the air as scores of revellers milled between the colourful stalls and stands. 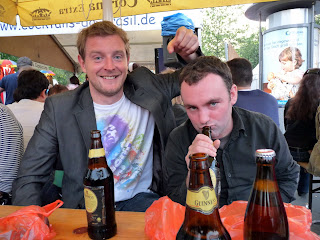 Drink flowed and food was eaten.
"It was a carnival atmosphere," as I told my dad a few days later.
After arriving with our bottles of Sterni, we soon ran out and were quite happy to find the African drinks stand with Nigerian Guinness. The best of both words; Irish, yet exotic. A perfect 7.5 per cent combination of home and away. "Jaysus, we'll be goutered," I noted. It was delicious. Of course we had to get some more.
"You can always spot the Irishman at things like this," Ronan observed. "He'll be the fella, pasty and white, looking kinda confused and bewildered at everything - saying 'Isn't this all mad?' - trying to take it all in."
We looked around, confused and bewildered, trying to take it all in. "Isn't this mad?" We got another Guinness. 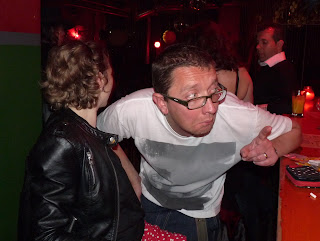 On one of my increasingly frequent toilet stops, after following the sound of African drums behind the trees just as light was failing, I discovered a grassy park absolutely covered in people, hundreds of them sitting or lying in little groups, all chilled out in the grass, sipping beers, passing joints, letting the sound of the night just wash over them and away. Lanterns hung from the trees, twinkled with the soft breeze. Gentle sounds soothed through the branches. Perfect.
We sat there with our Guinnii and discussed life. To be honest actually, I've no idea what we discussed, but I'm sure the conversation was of a very high standard. But salsa was calling and so regrettably we'd to take our leave of the gentle beats for some more turbulent ones. 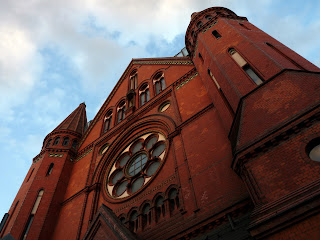 Nights seem to deteriorate once you leave the Karneval der Kulturen. The night before, a girl Ronan became acquainted with was on her way from the festival to meet us in Kaffee Burger around 7am when she got knocked off her bicycle by a car. "She had to get stitches in her head," 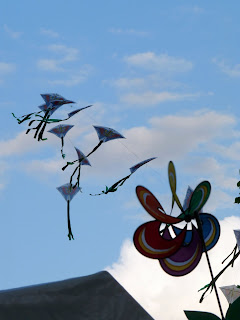 he lamented the next day.
His bad luck was compounded when their flights back actually took off without volcano-induced delay, the first time that's happened with any visitors of mine since the thing erupted in the first place. He's already talking of coming back. I don't think he'll get away so easily the next time.
Labels: beer Berlin Bicycle Karneval der Kulturen