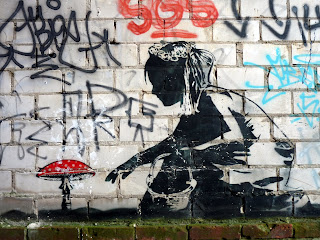 Back in the loop! Finally contactable by phone again after taking too long to get a replacement. The sim wasn't sent out by the mobile phone company despite their receipt of €10 for same because I hadn't rung them again to order it. They must have thought it was a present.
Once that was sorted all that was left to do was get a new phone. Well, not new exactly. This evening I got a call from Ali, presumably not his real name, who wanted to know how soon I could meet him. Twenty minutes I told him. Twenty minutes later we met. A lonely ill-lit platform. He emerged from the shadows of an Imbiss as I walked towards him. A short fellow (definitely not German) of quite dubious character. He fidgeted while I inspected the phone. I tut-tutted over scratches on the back, bemoaned the lack of charger or headphones. But dammit I needed a phone. I made an offer. He refused, sticking to his original price. No deal I told him. Hold on he said. He made a call. Okay. A deal was struck. €40 changed hands behind the Imbiss and that was that. He disappeared down one end of the platform and I waited for the train back home.
'Twas probably the same fucker who stole my previous phone 16 days ago. The scene of this crime not far from where the other took place, only this time as I took the S1 back I at least had a phone with me. Now I just need to get a new wallet, preferably one with some money in it too.
Labels: Bandito phone shopping