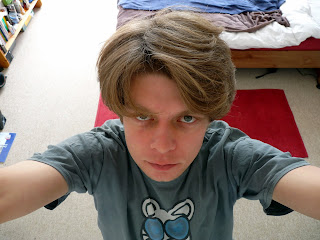 Got a haircut last Monday. A hair, that is. Don't think she cut any of the others. If anything, I've more hair now than I did before I got it cut. Seems impossible to get a decent haircut in this city.
After going to all the fancy places with coffee tables and poodles and forking out a fortune to get previous Haarschnitts, I followed the advice of someone who hasn't had a haircut in years (should have known) and took my custom to one of the cheaper places. €10 for a wash, cut and go.
A lot of places advertise €10 for a wash and go, leading my uncle (visiting with my aunt and cousin last week, more on their shenanigans later) to wonder why they emphasise the "go" part. "What else are you meant to do?" he asked.
I went to a a snazzy-looking place, all mirrors, black and white furniture with jagged edges, on Alte Schönhauser Straße called Unicut (again, I should have known), determined to look normal once again. The girl's eyes nearly popped out of her head when I walked in. Once she recovered she pointed me to a ticket machine such as they have in the Bürgeramt to pacify the commoners. I was number 321. 3-2-1, I felt I was being launched into space.
"Just get the hair out of my eyes, and make sure I don't look like I'm from the 80s anymore," I told her as she prepared to tackle the mop. It's fast becoming my mantra. 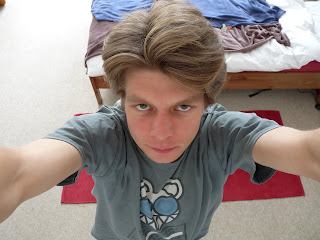 Well she lashed into it as her life depended on it, pulling and tugging, chopping and clipping, snipping and hacking enough to deforest the Black Forest. They'd have to call it the Black Deforest then although it wouldn't be black anymore either. The White Deforest I suppose but that would be treeson.
It actually hurt, and I didn't argue with her when she eventually announced: "Das reicht." That's enough. It's most certainly not enough - it looks as ridiculous as ever. The hair went straight into my eyes as soon as I left the shop. I'm afraid it might soon be back to the days of the shaver.
Labels: hair Haircut