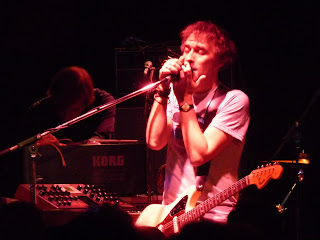 "Who the hell is Yann Tiersen?" asked my uncle Michael before his visit to Berlin. I was bringing him with my aunt and cousin to see the great man play at the Festsaal Kreuzberg and told them they were in for a treat.
"Oh Jaysus I don't know," was the reply. "I don't know if I like the sound of this fella at all!"
When we got there I wondered what I'd done. The volume from the support act was louder than max and I could hear feel the base thumping at my chest. The place was absolutely jammed and the air heavy with excitement. The concert had been sold out ages before and Berlin's young and beautiful were all there, grooving and shaking as groovers and shakers are prone to do.
My aunt and uncle plonked themselves in front of the merchandise table at the back and took it all in. There was too much to look at, I'm sure they didn't know where to look. As soon as Yann the Man (as he became known) came out on stage the place went berserk and I really feared for their well-being. Myself, Helen and Jenny had become separated from them and so it was only after a couple of songs that I fought my way through the crowds to see how they were doing. 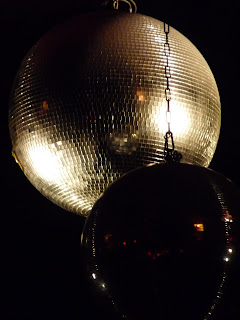 "Jaysus he's great!" said my aunt Eileen. "Mighty," agreed my uncle. They were begeistert as they say in these parts, enthralled by all the goings on and the manic music at manic volume. (Yann seeems to have turned his back on Amélie.)
In the end I think they enjoyed it more than Helen and Jenny did, particularly when Yann lost the plot and played like a madman possessed by a swarm of bees for the finale - I believe he was trying to get rid of people at that stage - but when I met Eileen and Michael anyway they were still smiling.
Not as much as when we met after work and they saw me in a shirt and tie and my pointy shoes - I've never seen a camera whipped out as fast - but their smiles were never far away for the duration of their visit. Michael had a smile from ear to ear when he found out we were going to his favourite pizzeria, the one ran by Italian punks renowned for bad service, or whenever another Dunkelweißen was ordered; Drunkelweißen as they became known.
Tierpark in the East Berlin was apparently shite however and not worth the entrance in. Helen reported miserable animals in small pens and nothing to do. The poor elephants were rocking back and forth in a manic fashion. Probably still recovering from Yann Tiersen. They didn't need such large ears to hear him... 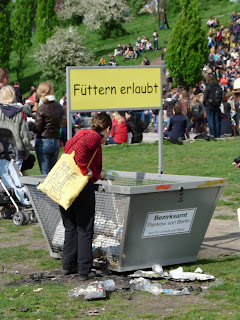 I ate like a king for the duration of their visit and wasn't allowed pay for a thing. In the end they only way to get them back was provide a long-promised dinner, although Jenny did most of the work as we used her apartment due to a lack of a kitchen table at mine. (If anyone is giving away a kitchen table please let me know.)
They also brought more tea. Two more boxes of Barry's to add to growing stockpile (don't worry it'll be drunk) and their generosity just went on and on. As with my previous visitors, Eyjafjallajokull conspired to keep them here longer than originally planned. Not long enough. Just a few hours in this case, but at least there was time for a couple more Drunkels.
Labels: Music Tea Yann Tiersen