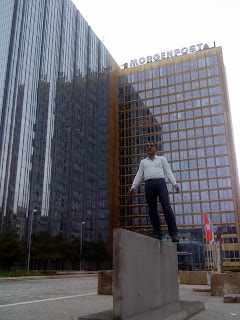 The first day at Bild! I've been launched into the world of trashy tabloid journalism. It's great! This morning as I glanced up at the glass facade of the 19-storey building of a million stories more, built in 1966 as a response to the Berlin Wall, I realised I was entering a whole new level in the world of media empires. The security on the way in would rival an airport's, with metal detectors and name badges and fearsome looking guards. Twice they searched me as I went in! I must have been looking particularly suspicious despite my best tie and pointy shoes.
Another girl with a particularly hard-to-pronounce name was starting with me and we were quickly shown the ropes. We were brought to the online editors' meeting on the 16th floor in the afternoon, where the latest stories and scandals were discussed at a frightening pace, with snappy opinions exchanged frank and forthright. "Ich finde das langweilig," one poor fella was told of his story pitch.
Once the dust settled I had a few minutes to take in my new surroundings; picture desks strewn with prints, fancy glass-walled offices, trendy desks and chairs, rows and rows of keyboards and screens, telephones everywhere and plasma televisions hanging from the ceiling beaming out pages of the newspaper or the latest images of interest from around the world. The energy palpable, excitement in the air, people everywhere scurrying about with a decided Springer in their step. 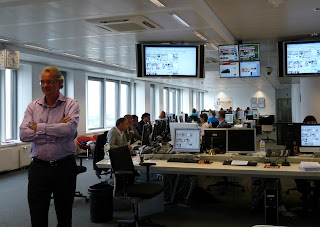 The cantine was fancier than most restaurants I've been to, while there was also a trendy café bar, a chemist, a snazzy delicatessen, and beer for sale in the shop! There's even a concierge. "If you've anything to post or if you need to get dry cleaning done, you can bring it there," Rowan, my new boss, told me. Wow! All without having to leave the building. People bustled all over. A far cry from the Gorey Echo when just meself, Sandra and Evelyn in the mornings would hold the fort.
In the afternoon I worked on stories of Earth-shattering importance; Paris Hilton baring her arse again, Rachel Stevens being pregnant, and Ballack insisting that Schweini would save the day for Germany after he was ruled out of the World Cup. Any story with a character called Schweini in it is always going to be a good.
In truth, it was an exhausting day. I'm absolutely knackered and my head feels like it's gonna explode, but dammit, I'm a journalist once again no matter what anyone else says. Mir meine Meinung!

I forgot to mention there's unlimited caffé lattes, freshly made as soon as you make them. A real machine which froths and steams the milk and everything, real coffee too, absolutely delish! There's also an unlimited supply of bottled water - without gas, with gas, and with just a little gas - take your pick. It's gas!
Labels: Bild job Journalism work