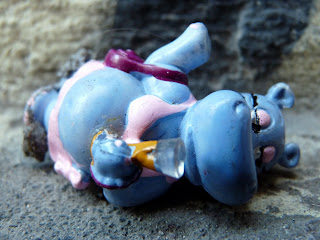 When I turned up I learned Theresas Mütter won without me last week. Again. "You keep missing our victories," I was told, gently reminded I missed another famous win while I was away in Perú. It seems they win more games when I'm not there.
Christoph came out from the changing room. "Ah Kiri! [For that is what they call me.] You're here. We'll definitely lose today so." Prophetic words as it turned out.
To optimise our chances I started as a substitute, and watched as we shipped three goals in the first half to Lions Titan from Cameroon, a very stylish team and I don't mean just their football. Matching white tops were complemented by black shorts and dark blue socks. They were faster, stronger, fitter and more skillful, but still we gave a good account of ourselves.
I was thrown on for the second half, charged with the responsibility of scoring goals as the lone striker, as we adopted a slightly negative 5-4-1 formation. I ran and ran and ran, chased, chased, chased, but like the wolf huffing and puffing at the little piggy's house of bricks, it was all für nichts.
It was awful. I chased and harried, gasped and wheezed, bust my guts to get the ball - my ears actually popped at one stage from the effort - but the ball just refused to cooperate, a magnetic aversion keeping it at least 10 metres away from me at all times. 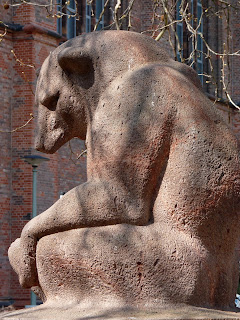 Midway through the half I pressurised their goalkeeper and he fumbled the ball. I pounced, knocked the ball past him, surged past to follow it. In slow motion I watched as a defender joined the fray. Every ounce of my being strained as I tried reach the ball, the goal gaping invitingly, huge and waiting. I couldn't reach the ball. Somehow the goalkeeper and defender managed to scarper it out of harm's way and I was left to kick the goalpost in frustration. It fucking hurt.
Later we'd another chance. Two against one. Just me and Christoph as we ran towards their abandoned goalkeeper. He passed the ball. All I'd to do was score. I didn't. Magnetic repulsion struck again and I missed it completely. I managed to withhold possession but the chance was gone, along with what was left of my pride.
I fear it's the beginning of the end. The legs are getting older and wearier. Not quick enough, not good enough. I liked it better when we completely shite and we took pride in the effort we made despite losing every game. Now, giving my all just forces me to confront my limitations. Like Madrid doing all they can to reclaim the league, sometimes all just isn't enough.
Labels: Fußball Life Theresas Mütter