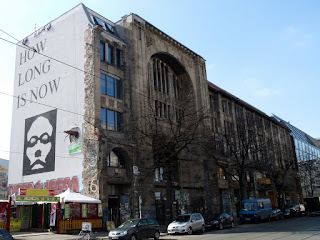 Another outstanding piece of journalism in The Irish Times today. Where do they manage to find such talent? Someone should give the author a well-remunerated job for a highly-esteemed media outlet quick!
http://www.irishtimes.com/newspaper/travel/2010/0403/1224267589724.html

Below is the "uncut" version in all its unadulterated raw and foul-mouthed glory, just for you, the long-suffering fans. 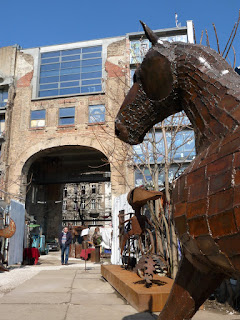 "How long is now" runs the giant mural on the side of Tacheles. Whether it’s a question or an existential sigh, it perfectly sums up the uncertain past, present and future of one of Berlin’s most remarkable initiatives.
Possessed by squatters and artists in the aftermath of the tumbling of the Berlin Wall 20 years ago, this iconic shell of a building now houses exhibitions, performances, a cinema, and three bars one of which, Café Zapata, houses a fire-breathing dragon which frightens the shite out of unsuspecting visitors. A few beers, and you won’t notice anymore.
Tacheles is Yiddish for speaking directly and honestly (as if Germans spoke any other way). The building is in the former Jewish quarter of Berlin, while Tacheles was also named in defiance of the East German propensity to repress freedom of expression (and everything else for that matter).
The building opened in 1909 as the Friedrichstraßenpassage, a giant shopping complex, one of the first of its kind, so named because it linked Oranienburgerstraße with Friedrichstraße behind it. It promptly went bankrupt, and was later reopened as a department store. That too didn’t last, and it was taken over by the AEG electric company to showcase their new contraptions and fancy technology. 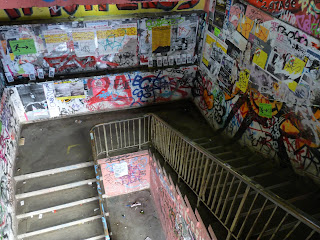 It was under their watch the building became the first to broadcast a live sporting event to world, with the transmission of the Berlin Olympics in 1936.
The Nazis later took over as they were prone to doing at the time, and the building became the central office of the SS. They horded French prisoners of war in the attic during the war when the building was badly damaged what with bombs falling on it and the like. Most of it was totally destroyed.
What was left didn’t fare much better after the war either I’m afraid. Russian soldiers used statues in the entrance for target practice, and they didn’t exactly wear slippers when they were stomping about. 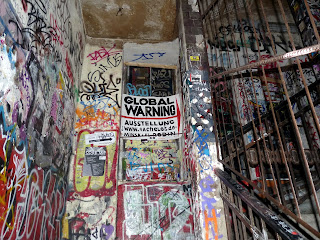 Those headless statues are still there today and can be seen on the way to the hinterhof behind, where artists and sculptors now proudly display their engaging creations, iron horses, iron eagles, spiky things, high things, mad things.
Inside, the walls are smothered from top to bottom in colourful street art which very much reclaims the notion of freedom of expression. Some of the imagery is just mad, better than the shit you’ll find in museums and better than some of the exhibitions which are always on show here. Bring a can of spray paint, have a go yourself – there’s enough space for all and always room for improvement. 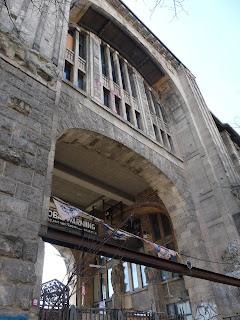 Needless to say the building, while structurally sound, is still in pretty bad shape, despite all the licks of paint, but this only adds to its charm. Don’t be put off by the dark corridors or the smell of piss on the stairs and the foyer, or even the rats which scurry around the hinterhof at twilight – it only adds to the authentic experience.
Tacheles’ future is still uncertain, sitting as it does on real estate worth some €250 million beside Berlin’s tourist and financial centres. Legal battles pitting squatters and artists against developers and the city are part and parcel of its existence.
Guests are invited to sign a petition to help preserve its future as a creative space. (Anything to stop it from being turned into yet more apartments.) 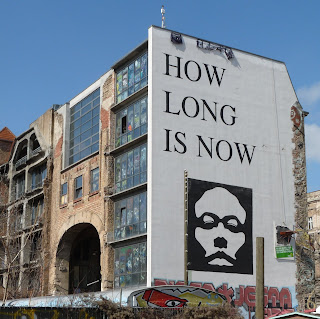 I guess if enough people get involved, we won't have to wonder "how long is now?" anymore.