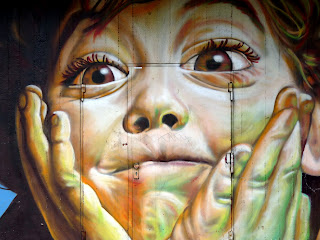 Forget about museums, Berlin's art is on the streets. Walls, lampposts, alleyways, ceilings, stairways, the sides of buildings, the sides of U-Bahns - everywhere you look expression has been given a free rein. Canvas and conformity paintbrushed to one side, as all a Berlin artist needs is a hoodie, a spraycan and a great sense of humour.
Anyone can do it, just as long as you don't paint over some work which is better than your own, so the law of the street ensures Berlin's graffiti and street art scene just keeps getting better and better. I may have found my calling!
I learned all this as I accompanied tourists on a free guided tour arranged by the appropriated-named Alternative Berlin group, which promises to bring visitors to the real underground shit going on, away from the usual tourist haunts. It gives guests a taste of what Berlin is really all about. 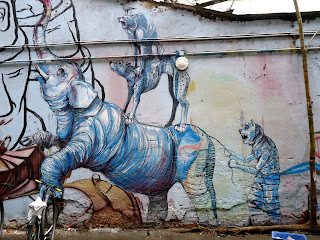 Like awestruck sheep following the cool ram, we followed Mark as he brought us around on a tour of all the best sites, bleating with appreciation as he gave us the history, the stories and the reasons behind Berlin's iconic and unknown, an artist's insight into what makes the city a buzzing centre of underground creativity, the European capital of sub-culture.
He explained that street art as we know it was born in Philadelphia, thanks to the exploits of one Daryl McGray who gained notoriety in the 1960s for writing Cornbread all over the place, including on the side of an elephant after he broke into the zoo to write "Cornbread Lives" on the poor creature to counter rumours of his untimely demise. Now that's one way to get your message across! 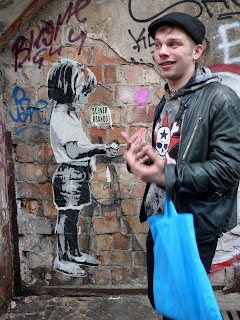 Many street artists have taken up stencil art these days; a form of wall-papering, where the artwork is prepared at home or in a studio on paper, and then simply pasted on the wall. Unlike graffiti, it's not strictly illegal. The artist can't be arrested for spraying a building. "It's like a safety net for the artist," Mark explained. It also affords the artist more time on their work leading to a higher standards overall.
Irish mothers visiting Berlin take note - there's some fine paper on the walls here just waiting to be stripped down for covering school books.
Soon we noticed sixes painted all over the place, on scarred walls, broken pavements, old advertising posters, the back of faulty lampposts - everywhere, in fact, something was wrong. "This is the hardest-working street artist in Berlin," Mark announced, pointing out that an estimated 650,000 of these sixes can be found in Berlin, painted on everything the city should have replaced, knocked-down or rebuilt.
He pointed to a bent lamppost adorned with a six on the back, and told us of a dog he found once with a six painted on his arse because he didn't have a collar. Soon, wherever we looked, we found sixes big and small painted like an accusing finger on all the city needs to correct. I guess if he didn't want to work so hard, he should have picked a different city. 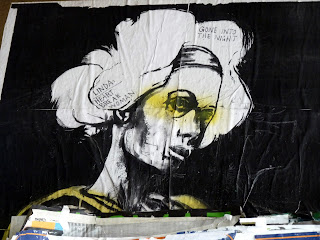 We heard the story of Linda, a lost love for whom a heartbroken artist made his pleas public, telling her how much he loved her, begging her to take him back, asking for forgiveness, all through images with striking yellow eyes.
The messages became longer and longer, and it wasn't long before the city got involved, with radio stations running campaigns asking Linda to give her former lover another chance. "Take him back!" urged people ringing phone-in shows. "He loves you! Give him another chance!"
Soon people were leaving their own messages for Linda too. To put an end to the craziness, the artist eventually admitted Linda never existed at all - it was just a form of expression.
"But it's a perfect example of how a street art campaign can catch the imagination of the public," Mark pointed out.
Uh-huh. We were devastated. The happy ending in our heads of Linda being reunited with her lost love shattered with the illusion. 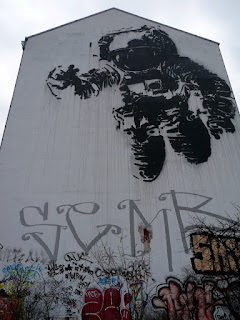 Never mind. He brought us up to Tacheles to soak up some more sub-culture and a couple of "Sternis" from the local Spätkauf. (More on Tacheles to come soon.)
There's nothing better than strolling Berlin's ramshackle and untidy streets with a bottle of Sterni in your hand, looking out for sixes and random street art scattered all across this decadent city. Wine and cheese and crap in a frame? Gimme a bottle of Sterni and some graffiti any day. 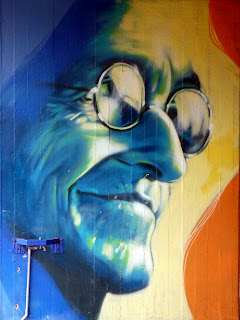 Kreuzburg for "the best falafel in the world" and then Friedrichshain followed, as we learned of artists like El Boko, Prost and Alias, all famous for their exploits in the city. Mark's a very likable fellow, and he does a damn good tour; he infected all of us with his boundless enthusiasm.
"How much is a can of spray paint?" I asked him at the end. "About €2.50," he replied. The same as three bottles of Sterni from the local Späti. Now there's a fine cultural evening right there!