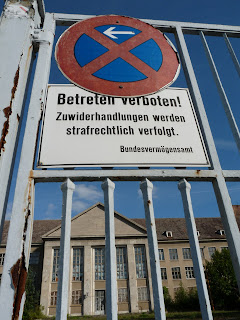 A couple of weeks ago we broke into the former headquarters of the Soviet military in Germany. They weren't there of course, or I wouldn't be here to be able to tell you of it, but it was scary nonetheless. The last Russian soldiers had left in 1994, the tumbling of a certain wall rendering their presence about as welcome as a fart in a Sputnik.
It's a huge site, in Karlshorst, Berlin, with several imposing buildings scattered around a large area, all boarded up, sealed off from prying eyes, stripped of the secrets and any evidence of the Russian hi-jinx from the Cold War, a war which invariably got a lot colder every Berlin winter when each side used to stock up enough nuclear snowballs to last through the spring.
It was here that the unconditional surrender of German troops was finally signed 15 minutes into May 9th, 1945, when Generelfeldmarschall Wilhelm Keitel scribbled his scrawl on the sheet of paper put to him at Stalin's request by Marshal Georgy Zhukov. 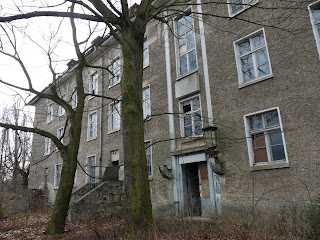 (The room where this momentous event took place can now be visited without the need to break down doors or smash windows in the small but fascinating and free-to-enter Deutsch-Russisches Museum.)
It was Zhukov whose men took 134,000 German soldiers prisoner in the surrender of Berlin a week before.
Then, from 1945 to 1949, Karlshorst became the headquarters of the Soviet Military Administration in Deutschland, until East Germany was formed on October 7th, 1949 and the SMAD was replaced on October 10th by the Soviet Control Commission. Same shit really. As I said earlier, the last Russians didn't leave until 1994. 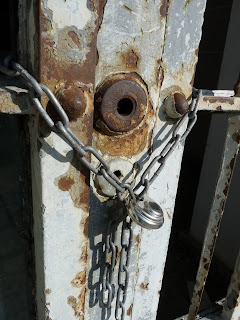 I'd actually made my way there alone last September on a reconnaissance mission when I managed to break into the site, but found it very hard to get into any buildings. All doors were very securely boarded up and locked, heavy reinforced wood and metal sheeting. "Eintritt Verboten!!!" they screamed. Curiosity piqued, my desire to get in became overwhelming. What great secrets were being hidden? What untold stories waiting to be told? What wonders to be discovered?
After circling for ages looking for gaps in the boards, or loosely fitting doors, a broken window, anything, I found I'd just have to break my way in. I grabbed a brick and smashed it down on a padlock to one of the doors. Each blow rang out like a rifle shot. Bang! Bang! Bang! Karlshorst is quite a residential area so I was conscious each blow would only bring attention to myself. Nevertheless, the desire to get in drove me on. Bang! Bang! BANG!!!
It opened! The chain snapped and I pushed the door tentatively in. A dark hallway, broken glass, flaking paint. I made my way in and peered into various rooms. 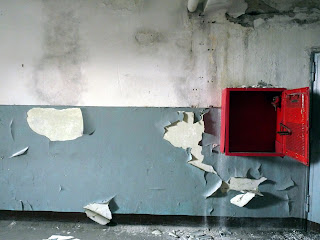 Again, broken glass, flaking paint, wires and rubble strewn around. I was looking for evidence of the Russians, an old Kalashnikov, Wodka (as it's written here), a CCCP metal flask, an old fur hat, anything at all, but all I found was broken glass, flaking paint and graffiti from previous visitors.
Light was failing and so I admitted defeat, vowing to come back another day armed with a crow-bar to explore the other buildings. On the way out I noticed a sign announcing their planned future as part of Wohnpark Karlshorst, 350 "attractive and valuable one to four-bedroomed apartments", already for sale off the plans. Apartments! Nowhere's safe. 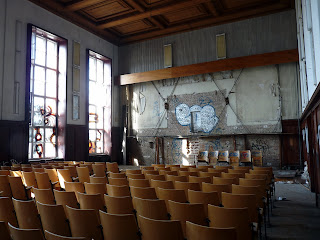 Four months in South America postponed the return visit, but even then I often thought of my date with the old abandoned Russian military headquarters. When we got back from Perú it was too damn cold to do anything, but finally, a couple of weeks ago, I was able to go back, this time accompanied by Jenny, JB and Isabelle.
We got into the site easily enough, just by lifting up the fence to the side, but were slightly perturbed to notice construction cabins and vehicles parked in front. There was no sign of any life though, so we proceeded with caution.
The doors were no longer so well sealed and we were able to push our way into the first building easily enough. We nosed around like exciting puppies in a bone shop, exploring rooms, taking arty photos. I was delighted to find Russian writing on some of the walls, lampshades still hanging from the ceilings, and old East German wallpaper as if we'd stepped directly back in time. 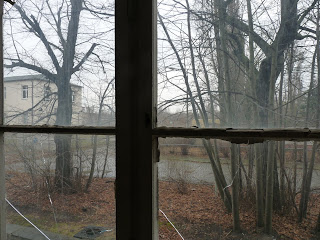 From the top floor I peered out the window and noticed a man walking below. Another human! Shit. I told the others we'd have to be careful, we weren't alone, and so we tip-toed back out the building.
Walking around the other side of the main building, I nearly walked into another man. He was coming out of a cabin about five metres in front of me. Aaaaaghh!! Retreat! Retreat! I urged the others to move back, and we hurried as quick as we could back the way we'd come, trying all the while to be quiet. It was impossible though - broken glass littered the site so every footstep crunched loud enough to wake the dead.
Thankfully he didn't follow - I don't know if he saw us or not - and we were able to duck around the corner, in through another broken door, and into the cellar. All dark, rusty metal everywhere, ominous-looking machinery, metal walkways over great tanks of water, the darkness pierced only by the odd shaft of light. This is more like it! We nosed around again, guided by the red focus light from my camera. Groping around in the dark, I found a stairway which led up. Let's go! 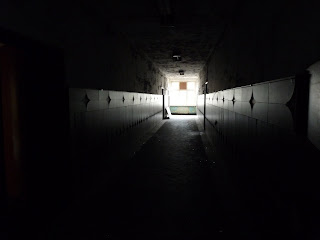 Soon we were exploring the Russian corridors of power, the officers' mess now a real mess, jangled wires, rubble, broken glass, graffiti, and old Russian newspaper clippings pasted onto the corridor walls. Up we went to the attic, where I found old Russian graffiti carved into the wall, presumably from disgruntled soldiers. Downstairs we found the conference centre, all the seats facing attentively to the front, a room high above it where all could be overseen, old rusty listening equipment, all switches and knobs, sadly dilapidated, but fascinating none the less.
Then we heard voices. People! Shιt! We ran into a room and hid behind the door. Who the hell were these people? Russians? Polizei? Other curious visitors? The voices approached. Closer, closer, closer... Dammit, I couldn't take it anymore.
"Wait there," I told the girls. (We'd already lost JB somewhere along the way.) "I'll go see who it is." Better just one of us caught than all of us. 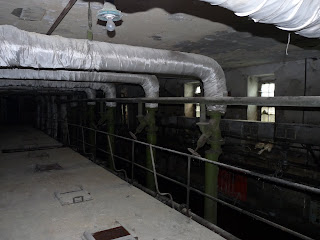 I walked out and discovered an old woman and her son, potential apartment buyers checking out where they might be living in a few months. It was open day! The developers showing people around for free, and there was us sneaking around and breaking in like criminals! Suddenly it wasn't so exciting anymore.
Outside a salesman showed us the plans and gave us the prices. Most of the apartments are sold already and I'm sure he thought he'd sold another two as we nodded attentively and cooed our appreciation. We thanked him for his time and promised to get back in touch, before leaving through the front door.

So we didn't actually have to sneak in, but we definitely saw a lot more than we would have otherwise, and it sure was a hell of a lot more fun. For others who'd like to see this old abandoned Soviet military headquarters before it's too late, I've provided the following guide. Hurry up though. There isn't much time left! 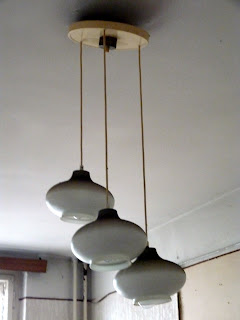 What
Former Soviet Military Headquarters in Germany.
Where
Zwieseler Straße 10-50, 10318 Berlin.
How to get there
Get the S-Bahn to Karlshorst and walk or get the bus from there. It's not the Deutsch-Russisches Museum, which is signposted and well worth a visit in itself, but the huge building beside it. Map can be accessed here.
Getting in
If there's an apartment showing, simply pretend you want to buy one. Otherwise, between the site itself and the Deutsch-Russisches Museum, there's a laneway where you'll easily be able to lift the fence and enter. 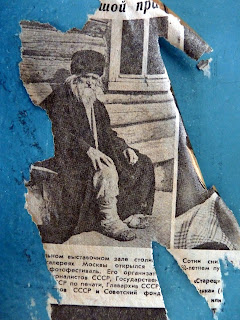 When to go
Sunday. There won't be any workers on the site unless it's an open day.
Difficulty rating
5/10 Really depends on what stage construction is at and whether the workers are there.
Who to bring
Like-minded explorers.
What to bring
Camera. Beer and/or some Russian Wodka with which to toast the site's former inhabitants.
Dangers
Nosy neighbours and spoilsport construction workers and/or security guards. Be quiet and you should be okay. Viel Spaß! 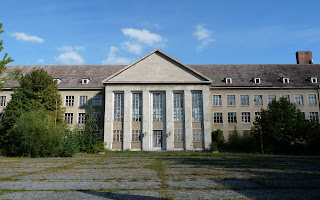 Again, please share this with the world, so others may get a taste of Berlin's fascinating past before it's lost forever. The ongoing gentrification of this great city is shameless and it won't be long before there's nothing worth exploring at all. To this end, I'd welcome any suggestions for other sites or abandoned buildings to be explored before it's too late! 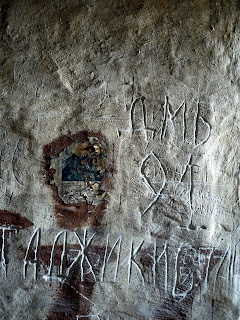 Pictures from the first visit, including shocking images from the Deutsch-Russisches Museum, can be seen here, while the latest snaps can be found here.
Labels: abandoned buildings Berlin Cold war Getting in Russia war