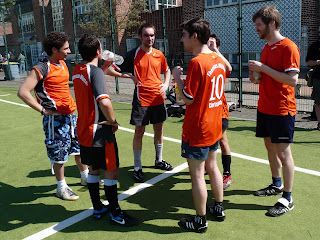 How quickly things change. Not so long ago we were happy if we didn't get beaten by more than ten goals. Then there was that famous first victory in November 2008, unbridled joy, tears and goosebumps. Then the famous revenge victory last June, prompting more wild celebrations.
Yesterday we won again! We won! My third victory with Theresas Mütter. 7-0! Yes, SEVEN!!!
Nerves were all a-jangle before the game. We were playing GPE United, apparently the basement side, and therefore one we could not afford to lose to.
(Apparently the Mütters won a game and had a couple of draws while I was in Perú. They won in spite of, or perhaps because of, my absence. I came back to be disappointed to learn I'm not the indispensable rock on which this team is built after all.)
Our spirits were buoyed when the opposition turned up with eight players, but tempers and nerves took a turn for the worse when the expected goals failed to materialise in the first half. It seems we're unaccustomed to the mantle of favourites. Chances went a-begging as we forget to play as a team, panic and apprehension playing their part in ensuring our numerical superiority was not exploited. Luckily we weren't playing at the Bernabéu or our fans would have whistled us off at half-time. 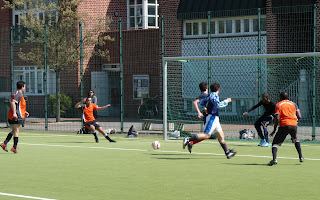 A good stern talk at half-time - sie sind nur acht! - and we were ready for the second half. I gave Johannes the camera and told him to take photos of all the goals we'd score. Soon after they arrived, and once the first one went in, the floodgates opened up, our opponents clearly knackered and demotivated after the first Tor.
I was supposed to be playing up front, but found there we were more Mütters ahead of me at times as everyone raced forward to get onto the scoresheet. Celebrations were muted however, and not a patch on those from the previous two victories I was party to, perhaps because we knew we were playing a basement side of only eight players, and perhaps due to the pressure we had brought on ourselves because of it. 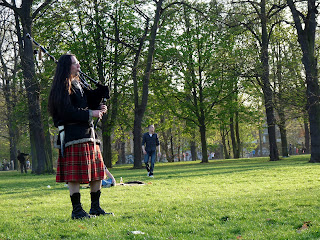 Never mind. We celebrated afterwards anyway, with a few Sternis for Frederico's birthday in Volkspark Friedrichshain where some lunatic was playing the bagpipes. It seems the rest of Berlin had the same idea as every spare bit of grass in the city was covered with people soaking up the sun, drinking Bier and grilling meat. It felt like the beginning of summer.
I guess a win is a win, and hopefully it will lead to better and bigger things, maybe a victory against a team with 11 players. If yesterday's result brings us together as a team, then it really will have been a Sieg to savour.