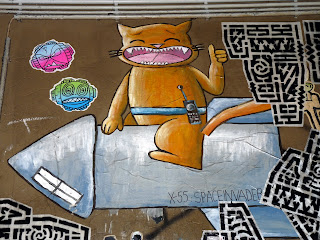 I called someone a Schweinhund the other day for the first time. Schweinhund is a wonderfully German insult, literally pigdog, a grievous slur to be called in any language. It's strange - I have a fondness for both pigs and dogs - but when the two are combined to make a Schweinhund, it changes the nature of the beast altogether.
This particular Schweinhund beeped at me as he roared past in his flashy BMW. I cycled after him and caught him at the red traffic light ahead, where I found him laughing and joking with his pals in the back seat. I knocked on the window and he looked up.
"Gibt's etwas los?" I asked him, to which he replied that I shouldn't be on the road. I wanted to tell that I had every right to be on the road, that there was no cycle-lane on Freidrichstraße, and therefore I had to cycle on the side of the road along with the traffic. I tried sort out all the grammar and sentence structure, tense and case, but instead I just blurted out: "Du bist ein Schweinhunde."
(Unwittingly I called him "pigdogs" after I used the plural version of the noun. Being called one pigdog is bad enough, but being called two must be particularly insulting.)
"Was?!" he replied, incredulation spreading across his face.
"Du bist ein Schweinhunde," I repeated. 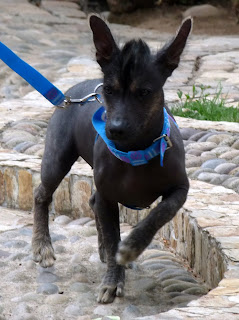 He looked down and grappled at his seat-belt fastener to get out of the car, but then the car behind us started beeping - the traffic light had turned green. I cycled off, leaving the Schweinhund snorting and fuming in his car. He drove along behind me, revving the shit out of his engine, no doubt trying to figure out what to do, before he eventually tore off in a squeal of tyres and frustration.
It was just the latest little battle in the war between cyclists and motorists in Berlin. They're a common occurrence here as Schweinhunde have a particular propensity for sitting behind the wheels of fast-moving flashy vehicles.
Interestingly, there's a breed of dog in Perú which looks very much like a pig, the closest I've come to seeing an actual Schweinhund (see left). I'm not sure if there's a connection or not, but at least you won't find any of them driving flashy cars at high speed beeping at cyclists.
Labels: Berlin Bicycle car disrespect Dogs pigs